Jrue Holiday returns to Pelicans with his family's blessing 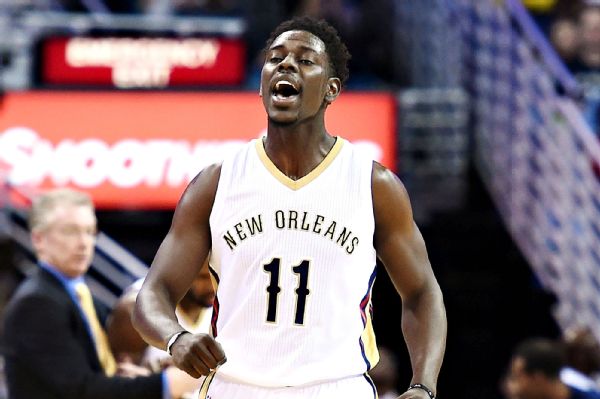 METAIRIE, La. -- Jrue Holiday couldn't hide his enthusiasm after his first practice with the New Orleans Pelicans this season.

Holiday spent the past three months tending to his wife, Lauren, who gave birth to the couple's daughter in late September and underwent surgery one month later to remove a benign tumor from the right side of her brain.

Holiday said Thursday he is "excited" to play in his first game this season, Friday against the Portland Trail Blazers. But he was more thrilled that his wife's recovery was far enough along that both felt comfortable with his return.

Asked why he was returning now, Holiday said, "Because my wife said I could."

"It was really just to see where my wife was in her recovery. And since she's doing so well, and since my daughter's getting bigger, and since my family and her family are there to help her out with anything ... I just feel comfortable being back and being able to leave them, if it's on a road trip or whatever it is.

Jrue Holiday respectfully declined to give specifics on his wife's condition, or where she and their daughter, Jrue Tyler Holiday, will stay during the season. Holiday, 26, said FaceTime will allow him to see his family's progress during Pelicans road trips.

The Holidays found out about Lauren's condition this summer. They relocated to the Raleigh, North Carolina, area, near the Duke University medical specialists who handled the surgery.

"My wife was, I think, four or five months pregnant, and all of a sudden she found out she had a tumor," Holiday said. "Because she has another person in her, obviously there are things she couldn't do for them to know what type of tumor it was or how serious it was."

Holiday said he was able to see people's "true colors" in such trying times, and the reaction from fans and the Pelicans organization has left him feeling blessed. He said the Pelicans, from whom he has received constant communication and support, have been open to his taking a day off should he need it.

"She has great fans who support her through soccer internationally or through her faith," he said. "I mean, just on Twitter, every day people are always saying they're praying for her. ... So many people since I've been back, they don't even ask how I'm doing, they ask how my wife's doing. And to me, that's awesome. That just shows how great people are around us."

Pelicans coach Alvin Gentry said there's a good chance Holiday, a regular starter, won't be in the starting lineup on Friday as he acclimates to game conditions. Gentry said he will discuss the situation with Holiday at shootaround.

"It's going to be fine," Gentry said. "Obviously it's going to take a little while for him to get his timing back, from a basketball standpoint. I think he's in really good shape conditioning-wise and everything, but you have to actually participate and play in games to get your basketball timing."

Holiday has maintained his conditioning by working out with assistant coach Jamelle McMillan and a strength and conditioning coach while away.

The 2-10 Pelicans are in last place in the Western Conference, but Holiday said he's encouraged by what he has seen.

"I can do whatever they want me to do -- if it's cheerlead, hand out Gatorades, play defense, call a set, whatever it is. I'm just here to help."

Holiday was limited to a combined 74 games in his first two seasons in New Orleans because of right leg injuries, but he broke through in 2015-16, averaging 16.8 points and six assists and a career-high 19.7 player efficiency rating in 65 games. His season was cut short after he fractured an orbital wall of his right eye during a game.