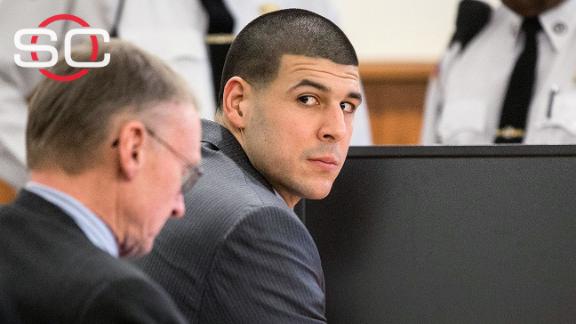 FALL RIVER, Mass. -- The judge who oversaw the murder trial of former New England Patriots player Aaron Hernandez is allowing his lawyer to question under oath an anonymous tipster who raised concerns about one of the jurors who convicted him.

Superior Court Judge Susan Garsh on Tuesday approved the request from lawyer James Sultan over the objections of prosecutors. The questioning will be done in court with Hernandez present, but the session will be closed to the public, Garsh said. She said a date for the examination would be determined later.

The woman's name has been redacted in court documents. The district attorney's office has questioned her motives and credibility, pointing out that she began a sexually explicit relationship with Hernandez after he was arrested in June 2013 for the shooting death of Odin Lloyd. They said she sent wrote Hernandez sexually explicit letters before and during the trial, and they said her father also served time in jail with him.

Hernandez was convicted of first-degree murder for Lloyd's killing on April 15 and was sentenced to life in prison without the possibility of parole. Lloyd was dating the sister of Hernandez's fiancee.

The former star tight end is also charged with gunning down two men in 2012 after an encounter at a Boston nightclub and is scheduled to go to trial later this year. Hernandez has pleaded not guilty.

Sultan has said the tipster called him anonymously several times after Hernandez's conviction, telling him she worked with one of the jurors on the case and recognized the person from TV. The woman said the juror was present for a discussion about the charges in Boston. Mention of that case was barred at the Lloyd trial. She also said she heard someone else say the juror had wanted to be seated on the Hernandez panel.

Prosecutors have said the woman lied about her job and level of contact with the juror.

Sultan acknowledged the woman had extensive contact with Hernandez but said there was reason to believe she had relevant information. He said in a filing Monday that there was "absolutely no downside" in allowing the woman to be questioned under oath.

"If a real possibility exists that a miscarriage of justice has occurred here, it is the court's responsibility to get to the bottom of it," Sultan wrote.