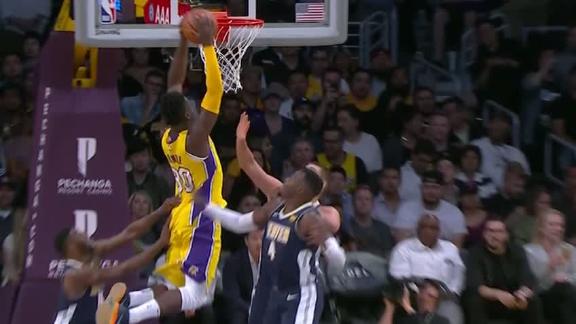 LOS ANGELES -- Julius Randle came into camp in the best shape of his life, transforming his body into "world-class shape."

The power forward has been working hard to add a deep perimeter shot to his game.

As if he wasn't already motivated enough with his contract eligible for an extension, Randle is fired up according to Luke Walton now that he has to earn the starting power forward spot in a competition with Larry Nance Jr.

"He's pissed off," said Walton, who started Nance for the second straight preseason game on Tuesday night against Utah. "He seems to be pissed off. But he's using it to play with an edge. And he's been great in practice the past two or three days. I thought he had a phenomenal game in Vegas. That's what competition's supposed to bring, the best out of you and I think he's really stepping his game up with that happening."

While the Lakers have had conversations with Randle and his representatives about an extension, the team has made it very clear that it plans to do everything it can to maintain its cap space to go after a couple of stars in free agency next summer. That means Randle will likely have to wait before getting the extension he wants.

"If it is right for both sides, we'll see," Randle said of trying to get a contract extension done early. "All I can really focus on is playing basketball. I can't really focus on the contract situation."

"At the end of the day, I am letting my agent handle all of that," Randle added. "We have great communication and we are on the same page and he is in communication with the front office about that. Because if I think about that day in and day out, I will drive myself crazy."

The Lakers would love to see an angry and highly-motivated Randle elevate his game another notch this season. Randle averaged 13.2 points and 8.6 rebounds while shooting a career-high 48.7 percent from the field last season. Team president Magic Johnson wanted to see several of his players come back in better shape and Randle delivered.

"Julius Randle, we've seen the pictures on social media," general manager Rob Pelinka said of Randle, who had some before, during and after pictures posted of his body transformation this summer. "I could go down the roster ... these guys look in world-class shape already. I think you can see that transformation. It's very noticeable."

Walton has said that he would put his money on Randle and Nance being as fast, if not faster, than other power forwards as the Lakers look to outrun opponents this season. The head coach has wanted to see how each fits in the starting lineup.

So far in the preseason, Randle is second on the team in scoring, averaging 13 points and grabbing a team-leading 7.6 rebounds in five preseason games. He's shooting 48.1 percent from the field but has only made 2 of 10 3-pointers. Randle also has a team-high five blocks.

"He got stronger and that is crazy," Brandon Ingram said. "To get even stronger than he already was, he is coming in same hours that I am in here. He refined his shot and he is shooting it from the 3-point line pretty well right now [in practice]."

Walton will have to figure out which power forward he wants to start to run with Ball. Randle, though, has shown him not only how serious he is about being in the best shape of his life but also a meaner disposition.

"My sense is it's more that we've tried Larry out with the starting lineup the last couple days than a contract thing," Walton said of Randle's anger on the floor. "Whatever it is that's motivating him, it's working out well for him right now."

The way Randle figures, the extra motivation and added hard work will pay off on the court and perhaps with his contract.

"Extremely motivated," Randle said. "How everything goes, I will let that take care of itself. But at the end of the day, my true passion is I just want to be great. That is the best motivation in itself."