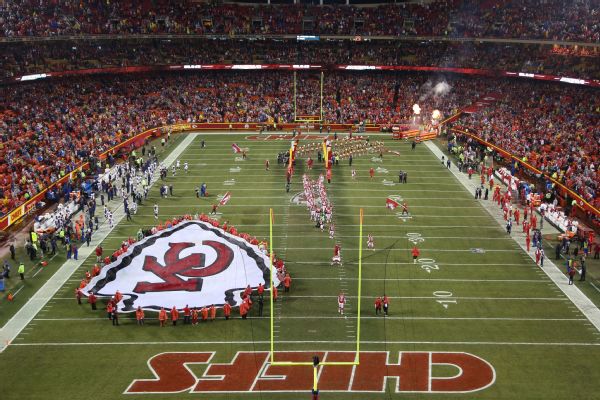 KANSAS CITY, Mo. -- A predicted ice storm for the Kansas City area on Sunday led the NFL to change the starting time for the divisional-round playoff game between theChiefsand Pittsburgh Steelers at Arrowhead Stadium to 8:20 p.m. ET.

The worst of a winter storm that is predicted to dump as much as a half-inch of ice on Kansas City will pass through the area early on Sunday. The NFL said in a statement the game was moved because of public safety concerns.

According to Accuweather.com, there is an ice storm warning in effect from 7 p.m. ET Friday to 1 a.m. Monday. Expected total ice accumulations through the weekend are expected to be between one-quarter and one-half of an inch.

"Moving the game from the original 1:05 p.m. ET start time will provide local authorities more time to clear roads in the area as the weather is expected to improve throughout Sunday,'' the statement said.

"The decision to make this time change was made in consultation with state and local officials as well as the Chiefs and the Steelers.''

Chiefs president Mark Donovan said team officials had stayed in touch with the league office as the forecast changed over the past several days.

"We just wanted to make sure we had the most up-to-date information," Donovan said. "At the same time as part of that conversation, we talked about the importance of making a decision quickly so we can prepare and get ready. Not only for us and our employees [and] our fans, but also as it affects the Steelers in their travel."

The Steelers said in a statement they have beenmonitoring Kansas City-area weather and "fully support the NFL's decision to move the game to Sunday night."

Donovan said that preparations at the stadium were already underway and that the Chiefs felt confident they would be able "to provide a very safe environment here starting when we open the gates."

"We have already started pretreating ... the entire complex, the entranceways, the parking lots and we're preparing the stadium, inside the stadium," Donovan said. "The field is covered, heated. The sod is laid. We're in good shape there. But you've got to treat the stands for ice. ... That's already begun."

The Chiefs president said he hoped the pushed-back kickoff time would help fans with their travel efforts.

"We want our fans to be safe," Donovan said. "We want to be aware. We want to be cautious. We're doing everything we can to present the game in the perfect window for everybody to have the best experience. Part of that is giving more time to get here."