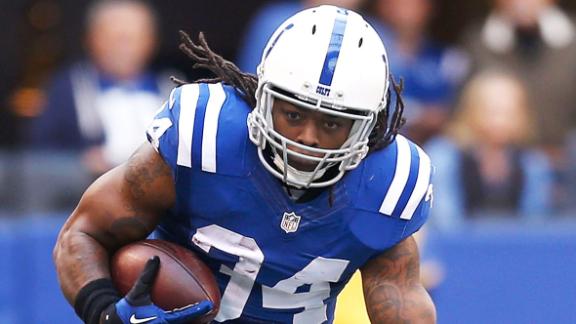 INDIANAPOLIS --Former Indianapolis Colts running back Trent Richardson,who was released Thursday, has filed a grievance against the team for voiding the $3.184 million he was to make during the 2015 season, according to a source.

Richardson hopes the grievance will help him recoup some if not all of the money he was scheduled to make next season.

ProFootballTalk.com earlier reported that the grievance had been filed.

Language in Richardson's contract allowed the Colts to avoid paying the final year of Richardson's rookie contract because he was suspended for two games the day before the AFC Championship Game at New England in January. Richardson was suspended because he failed to notify the team he would be missing a walk-through practice the day before the New England game when his wife was in the hospital for pregnancy complications.

Richardson told ESPN.com that his phone died and that when he finally reached coach Chuck Pagano and offered to fly out to New England on his own or rush to meet the team plane, Pagano told him not to worry about it.

"Nothing would stop me from going to work other than my kids," Richardson said Thursday. "With that, I told Coach the situation. I said I could fly in or try to make the flight. He told me, 'We weren't going to dress you anyway.'"

Richardson also missed making weight 14 times during the season, according to a source.

"We had made an agreement where I'd weigh 230 pounds, but it turns out that I was supposed to be 227 pounds and they didn't tell me that," Richardson said. "We've got a list of things we can use against the Colts where I can get my money back. They were fining me for failing to meet conduct code. Not making weight is not conduct code."

The Colts said they had no comment about Richardson's claim.

Grievance Filed Against Colts
ESPN Colts reporter Mike Wells discusses why running back Trent Richardson, who was released by Indianapolis, has filed a grievance against the team for voiding the $3.184 million he was scheduled to make this season.