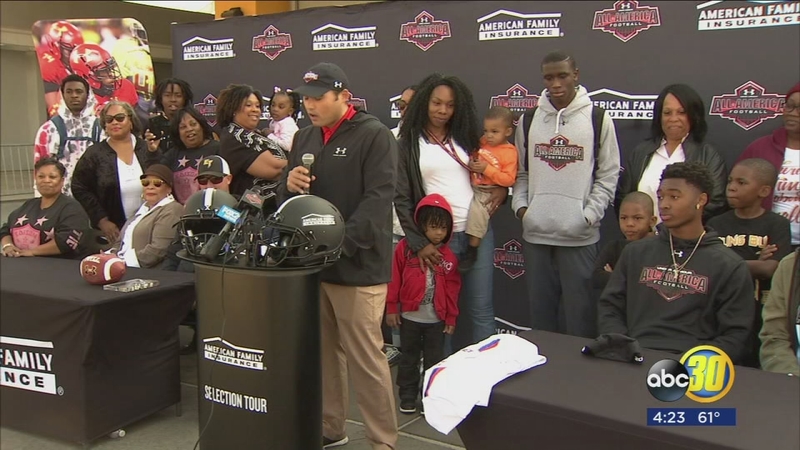 Two cross-town competitors are weeks away from representing the Central Valley in a national football game celebrating the best of the best.

An Edison Tiger and a Clovis West Golden Eagle have been selected to be a part of a prestigious group of athletes: the Under Armour All America Team.

For four seasons, Steve Stephens has proudly represented the Tigers, wearing black and gold but next month he will be sporting a new look in red, white and blue.

Stephens is one of 100-star players from around the country selected to compete in the Under Armour All America Football Game.

For the safety, this is an honor he is proud of.

Stephens' dedication to the sport he loves has been recognized in other ways. This summer, he spent a week competing at Nike Football's The Opening in front NFL coaches and athletes.

"When you dedicate yourself to being great in your sport great student friend and being a great human being you get rewarded. He makes us all proud," Coach Jason Murray said.

Stephens got his start in football following in the footsteps of his dad and grandfather. As he got older, he found a mentor in a beloved member of the Edison football community, Tony Perry.

Stephen said, "I wanna thank my coach Tony Perry, big thanks to him wouldn't be possible without him."

The man is known to most as the DB Guru passed away unexpectedly last month. News of his death shook the local football community but his memory lives on in the players he helped groom on and off the field.

"He had a huge impact... brought the best player out of me... he's still here spiritually," Stephen said.

For his commitment to helping lead Stephens and other local athletes, Perry received a special honor during Stephens' Jersey Ceremony on Thursday.

Clovis Quarterback Adrian Martinez said, "When you grow up playing high school football... the pinnacle of that is being selected to the All American Games, the best of the best players play. Just to be recognized as one of those players is pretty special."

To play in the Under Armour Game is also a dream come true for Adrian Martinez.The Clovis West Quarterback was presented his Under Armour jersey earlier this week. An injury prevented Martinez from taking the field for the Golden Eagles this year but past play and potential was enough to warrant the selection.

"Really getting the opportunity, being able to showcase skills to represent the valley and people I love have my back watch me on ESPN, big deal."

Two stellar athletes with one goal: to showcase the talents they have learned here in the Central Valley on a much bigger stage.

The Under Armour All America Game is being held in Orlando on January Fourth and will be televised on ESPN2.