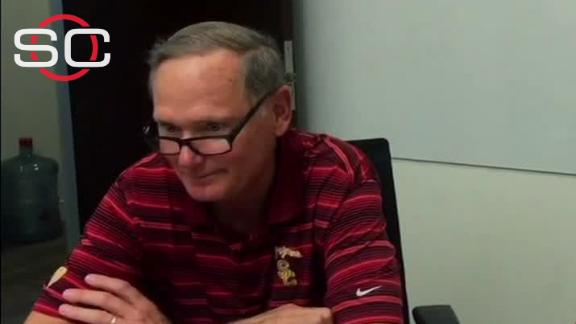 USC Trojanscoach Steve Sarkisian is taking an indefinite leave of absence after, sources say, he arrived Sunday to team facilities appearing to be intoxicated.

Offensive coordinator Clay Helton will take over as interim coach of the team, the school said.

Sarkisian was not in attendance at the Trojans' practice on Sunday afternoon. USC athletic director Pat Haden met with the media after practice to announce the move, saying it was "clear to me that he was not healthy."

A player told ESPN via text that Sarkisian "showed up lit to meetings again today."Another source said he showed up Sunday morning and "appeared not normal," and then was told to leave.

"They wouldn't let him come to practice," the source said.

Helton takes charge of a Trojans team that is 3-2 and 1-2 in the Pac-12 and has lost two of its past three games. Helton previously served as the Trojans' interim head coach for the 2013 Las Vegas Bowl after previous interim head coach, Ed Orgeron, quit.

Sarkisian is going through a divorce. His behavior while apparently under the influence of alcohol and painkillers at the Salute to Troy function in August drew national headlines, and he later apologized.

"He was dealing with family issues all [Saturday] night, but he hasn't been in a good place all season," a source told ESPN.

Sarkisian was also suspected by his staff to be under the influence during USC's 42-14 win overArizona Stateon Sept. 26, a source said, though Haden was apparently unaware.

Another source who is close to Sarkisian said the coach "needed to hit rock-bottom" to seriously confront an addiction and added that "this is rock-bottom."

"I was at a basketball event earlier today when I got a call to say Sarkisian was not at practice," Haden said Sunday. "I called Steve and he made it clear to me that he was not healthy, and I asked him to take an indefinite leave of absence. I think this is the right thing for our team.

"I've spoken to our team and our coaches -- they obviously had a great deal of concern for the health of Coach Sarkisian. It was also clear to me the support that Clay has from the team, and the staff. We've got a big task this week with theNotre Damegame, and Clay will do a great job getting our team ready. I don't have a lot of answers right now for you guys, as I first heard about this an hour and a half ago."

Sarkisian publicly apologized before the season after he showed up under the influence at the Salute to Troy event and made a slurred public statement. He announced he would be getting unspecified treatment, but didn't believe he had a drinking problem, blaming his unsteady appearance on combining alcohol and medication.

In the wake of Sunday's news, linebackerDaelin Hayesof Skyline High School in Ann Arbor, Michigan, said he would reopen his recruitment. Hayes had been one of the most vocal recruiting commitments in USC's Class of 2016.

"At this time my family and I feel that it is in the best interest to decommit to the University of Southern California and open up my recruiting process," Hayes said in a statement posted to Twitter. "I'd like to thank the USC coaching staff for the opportunities that they have placed before me."

Hayes, the 229th-ranked prospect in the ESPN 300, had verbally committed to USC in July 2014 after fielding offers from nearly 20 other top-tier programs, includingUCLA, Ohio State, Alabama, LSU, Michigan and Notre Dame.

Hayes had repeatedly expressed a strong pledge to the Trojans since his commitment andcontinued his stancein July at a prospect showcase at Nike's Oregon headquarters, saying he would try to convince other players at the camp to commit to USC.

"To me, a commitment is like a marriage," Hayes said at The Opening. "You don't tell your wife you're going to look around. If I was going to commit, I was going to be all-in and that was important to me. I'm bought in and I'm trying to recruit guys while I'm out here."

Sarkisian, a former BYU quarterback who played in the CFL, was an assistant under Pete Carroll on the Trojans' great teams of the previous decade. Coaching alongside Lane Kiffin, Sarkisian ran USC's offense before getting hired by the University of Washington to take over a winless program in 2009.

Carroll, now the coach of the NFL's Seahawks, told 710 ESPN Seattle on Monday that Sarkisian's situation "breaks my heart." Carroll also said that he has reached out to Sarkisian.

"But he recognizes it and he's going to do something about it, so this is the day the turn occurs. I'm grateful for everybody around him that he's finally figured it out. ... This is going to take a long time. This is big battle and we'll pull for him all the way," Carroll said.

Sarkisian rebuilt the Huskies into a regular bowl team, but couldn't lift them among the Pac-12's elite. The Torrance, California, native left Washington to return to USC after Haden fired Kiffin five games into the 2013 season and then told interim coach Orgeron that he wouldn't get the full-time job.

Helton coached the Trojans for one game after Orgeron quit in disappointment, and Sarkisian kept the veteran coach on his new staff, which includes five coaches who worked with Sarkisian at Washington.

Sarkisian went 9-4 in his first season at USC, losing a handful of big games but showing promise in the final year of the school's NCAA-mandated scholarship restrictions. In the first recruiting cycle after the sanctions ended, Sarkisian and his staff signed the nation's consensus top class last February.

The Trojans were ranked No. 8 in the preseason AP Top 25 and picked to win the Pac-12 in a media poll, but the talent-laden team has been unimpressive since rising to No. 6 in the rankings last month. USC gave up 41 points in a loss toStanfordinWeek 3, its first defeat of the season, and the offense was inept throughout a five-point loss to the Huskies on Thursday.

USC enters a tough stretch with games against No. 14 Notre Dame, No. 4 Utah and No. 23Calover the next three weeks.

When USC plays Notre Dame on Saturday,Helton will become the fourth different coach in four seasons (Kiffin, 2012; Ed Orgeron, 2013; Sarkisian, 2014) to take on the Fighting Irish. In contrast, Brian Kelly will have been Notre Dame's coach in all four games. 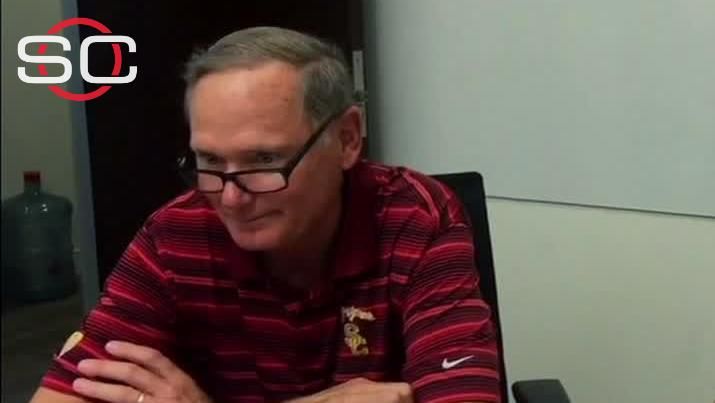 Haden: It was very clear that Sarkisian is not healthy
USC athletic director Pat Haden explains why he asked coach Steve Sarkisian to take an indefinite leave of absence and talks about the team's concern for Sarkisian's health.

Trojans still have plenty to play for
In the wake of Steve Sarkisian's leave of absence at USC, Ted Miller and Sharon Katz look at where the Trojans go from here, and how they can turn their season around. 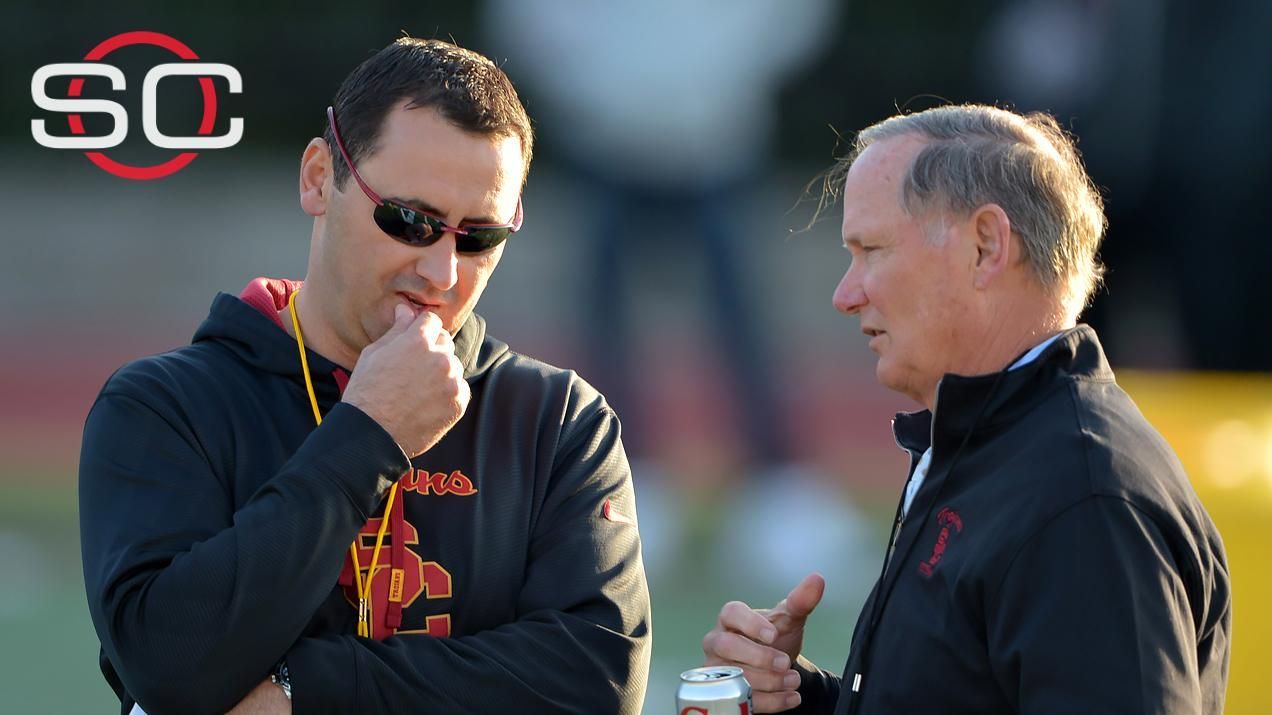 Can Haden save USC's chaotic season?
Ted Miller reacts to USC coach Steve Sarkisian taking an indefinite leave of absence, and discusses whether AD Pat Haden and interim coach Clay Helton can get the program back on its feet. 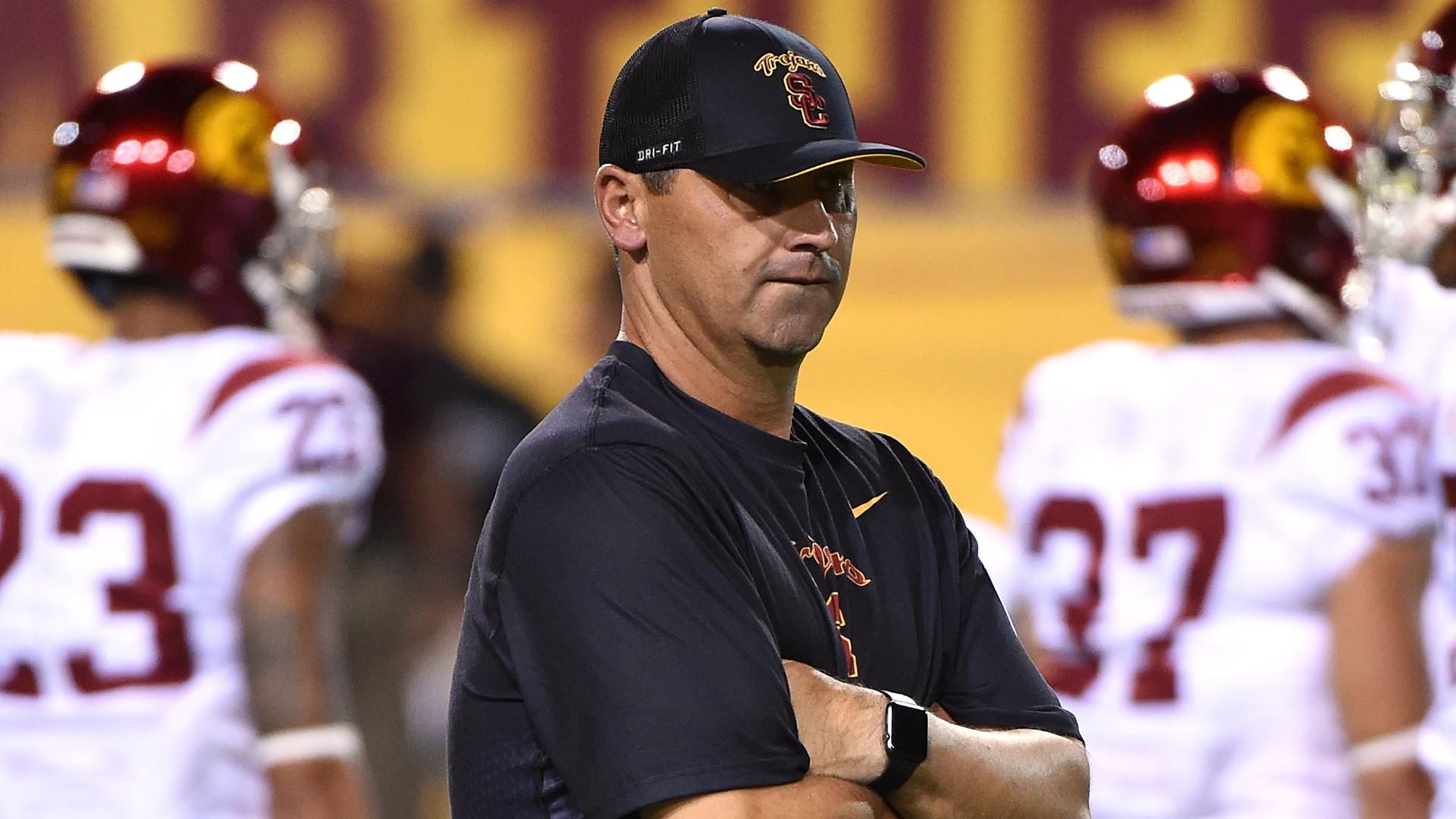