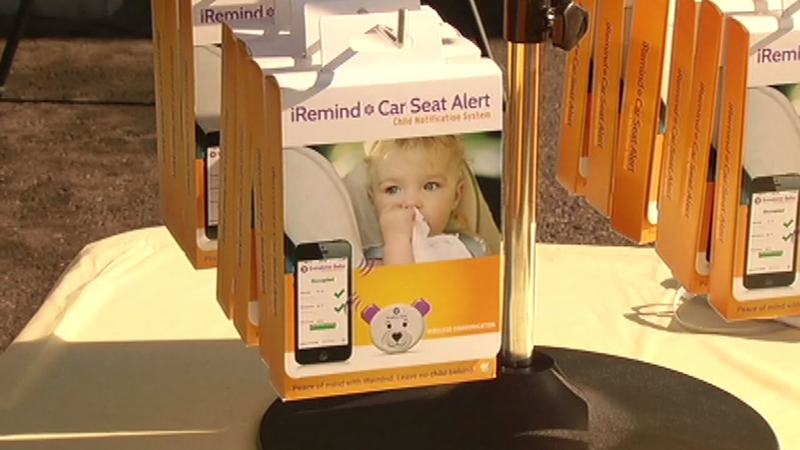 SAN JOSE, Calif. -- Leaving a child in a hot car is among the most tragic mistakes a parent could ever make. A local inventor is selling a device to prevent that and it's being manufactured in the Bay Area.

On a sunny October day, Marti McCurdy gave a sobering demonstration. Inside the car, temperatures climbed to 107 degrees in just 10 minutes.

"If you notice, there's a temperature inside and outside the car," said McCurdy. "When children are left in the car, they perish within an hour or two of being left."

It's a story that's made headlines too many times.

"I kept seeing these tragedies happen. in the United States. We basically lose a child every nine days," MCCurdy said.

So in the spirit of Silicon Valley, McCurdy wanted to do something about it. The product is called iRemind.

"We have the car sensing pad that goes underneath the car seat," she said.

A sensor can tell when a baby is sitting in the seat and it turns on a tiny transmitter. The battery lasts for two years, sending a low power signal to a person's iPhone. Users won't know it's there unless parents forgets their child and walk off. As soon as a parent gets far enough away, the alarm will goes off and unlike a text message or a phone call, the alarm sound is pretty hard to ignore.

The alarm won't stop until parents get back in arm's reach of their child. Parents also don't need an iPhone to use this.

"These are the key fobs," McCurdy said. "Often times it's a caregiver or it's a grandparent, so they might not be up on the latest technologies."

It sells for $99 on Amazon.com and it's not made in China.

"And we look forward to doing more to help the innovators manufacture here in San Jose," Liccardo said.

For McCurdy, it made sense. San Jose is her home.
Related topics:
technologysan josesafetychildrenchild deathbusinessheatchild in carsmartphonescalifornia
Copyright © 2021 KGO-TV. All Rights Reserved.
CALIFORNIA