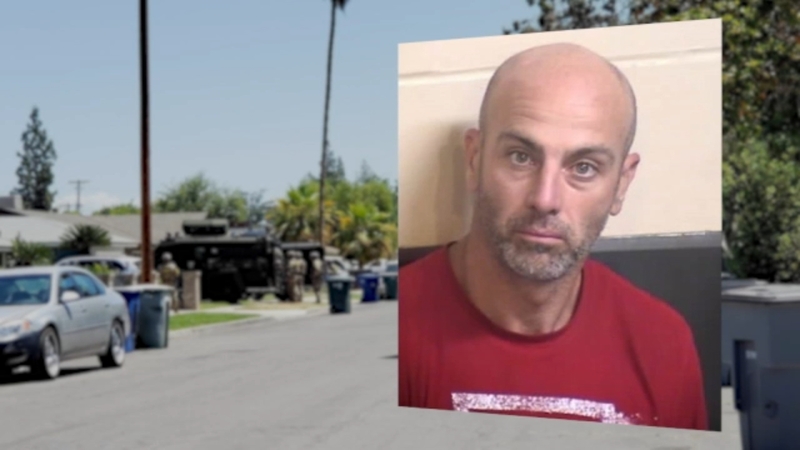 The shooting was Fresno County's first homicide of 2021.

At a press conference on Friday afternoon, authorities said Engelman has associations with local white supremacist gangs, and identified as a member of the 'Fresneck' gang.

"We have taken a very dangerous man who is associated with the white supremacist groups of gangs here in Fresno off the streets today," said Fresno County District Attorney Lisa Smittcamp.

During the investigation, detectives learned about another incident involving Engelman, a family member, and an acquaintance.

They wouldn't elaborate, but said it's why Engelman has also been charged with kidnapping, elder abuse and domestic violence, besides the murder of Hampton.

Hampton was found shot and killed in a vehicle that crash through an iron fence near Olive and Polk on April 13.

Sheriff Mims said they haven't determined an exact motive for the murder, but believe Hampton was specifically targeted.

"They were acquainted and, in fact, had a long-going dispute between the two of them," Sheriff Mims said.

Detectives were searching for a white Chevy Tahoe with black door handles and 22-inch rims which they believed belonged to the suspect involved.

They say they traced the car to Engelman.

Officials said on Tuesday they served two search warrants: one in Coarsegold at Engelman's home and another one at a home in Fresno that he frequented.

"During the course of the searches, detectives recovered the Chevy Tahoe in question, " said Mims.

@FresnoSheriff says detectives recovered the Chevy Tahoe in question. (Pic previously released)
Detectives believe others are involved, but they are confident Engelman is the shooter. Officials say an they don’t know exact motive but say Hampton was targeted. @ABC30 pic.twitter.com/I5OcvGpNoX

Authorities also recovered weapons, but haven't been able to determine if any of them were used in Hampton's death.

@FresnoSheriff says on May 11th, search warrants were served at homes in Coarsegold and in Fresno. While in a neighborhood near Ashlan and Marks Avenues, deputies on the Fresno County SWAT team contacted Engelman and placed him under
arrest. @ABC30 pic.twitter.com/4OHqrjpl5s

D.A. Smittcamp credited the multiple agencies that worked together to build a case that lead to charges and the arrest of Engelman.

"When time was of the essence they were able to accomplish in days what would've taken months and weeks in years past," Smittcamp said.