Caught on camera: Train slams into semi-truck near Chowchilla 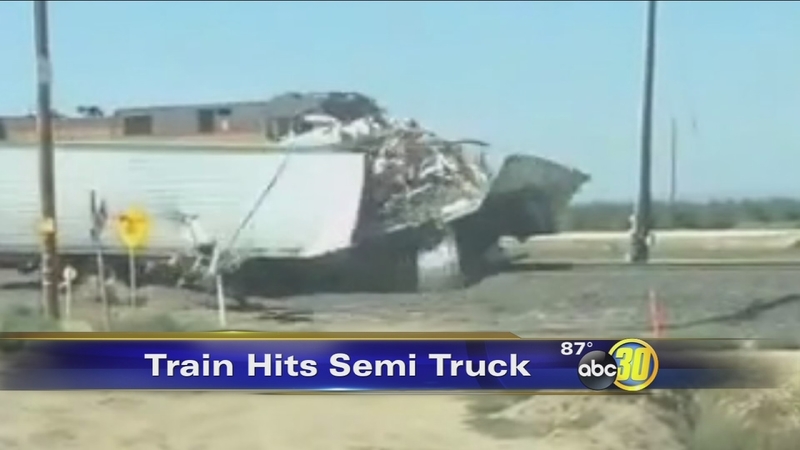 Caught on camera: Train slams into big rig near Chowchilla

FRESNO, Calif. (KFSN) -- A train crashed into a stranded semi-truck near Chowchilla on Sunday afternoon, and the powerful impact was captured on a cellphone camera.

The collision happened shortly before 5 p.m. on Vista Avenue near Highway 99. The nearly mile-long Union Pacific train was carrying hundreds of military vehicles, mostly Stryker armored personnel carriers. Labels on the vehicles indicated they were being shipped from Ft. Lewis, Washington, to Fort Irwin, California, in the Mojave Desert.

A motorist named Tee Sae gave Action News the video of the crash. He was waiting at the rail crossing at Vista Avenue and Highway 99, saw the stranded truck and started taking video. It shows the truck driver walking down the tracks, frantically waving his arms to stop the train, but, as the video shows, the train kept on coming. The instant the train hit, the trailer of the semi exploded, sending its cargo, cardboard boxes full of plastic bags of trail mix flying.


On the other side of the tracks, on Highway 99, Robert Thissen was riding with his parents, using his cellphone to take video of the unusual train load of military equipment, when he saw what was about to happen, and on the video you hear him scream, "Stop, Dad, stop...oh my God, we are going to die!"

A short time later, Action News caught up with Thissen in Chowchilla. He explained what was going through his head when he saw the impact.

The tractor of the semi rolled onto Highway 99. Ken McIntire said he was lucky to avoid hitting it in his truck.

"That was a pretty close call for me too, so I'm very thankful," he said.

Pieces of the demolished trailer were stuck to the front of the train, and boxes full of bagged trail mix were everywhere. The train was not damaged, and was able to move down the track within a couple of hours after the incident. Despite the incredible impact, nobody was hurt.