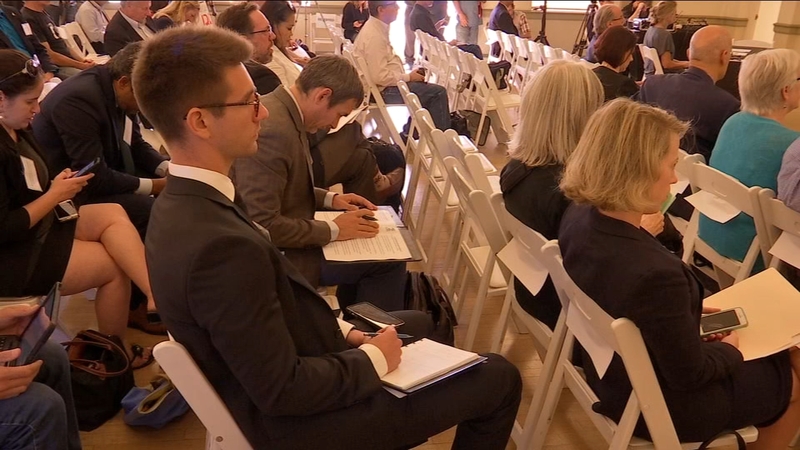 FRESNO, Calif. (KFSN) -- The Trump Administrations efforts to stop California from imposing its own air pollution standards for cars and trucks got a negative reception in Fresno.

The EPA held the first of three nationwide hearings on the plan to strip states of their power to set emission standards and to roll back the gas mileage requirements for new cars. The EPA is getting input on their plan called SAFE for Safer, Affordable Fuel Efficient vehicles.

Under current law cars built from 2022 to 2025 would have to get 36 miles per gallon. The EPA at the urging of President Trump wants the standard frozen at the 2020 level of 30 miles per gallon.

More important for California and a dozen states is the plan to revoke their ability to set their own, lower emission standards to reduce pollution.

With electric and Hybrid cars parked outside, inside the EPA's Michael Stoker said the federal government wants to lower position is the 36 miles per gallon fuel economy and allow cars and trucks to emit more pollution.

"The standards currently in place for model year 2022 to 2025 are no longer appropriate."

The move would also eliminate California's ability to set it's own vehicle air pollution standards. Mary Nichols Chair of the California Air Resources Board blasted the proposed changes.

"There's nothing safe about this proposal. It turns its back on decades of progress of cleaning up cars and trucks it ignores available and cost-effective clean vehicle technology wastes gasoline and pumps more climate-changing gasses into the atmosphere. It also blows a hole in our efforts to meet health-based standards for air pollution a point that carries additional weight here in Fresno, which along with the Los Angeles Basin is ground zero for the most stubbornly persistent violations of air standards in the nation."

California Attorney General Xavier Becerra told the Federal Government to back off.

"Stop trying to interfere with the rights granted to California and other states by the constitution and the Congress."

Becerra vowed to fight the federal government all the way and Nichols said the state will ignore the feds if necessary.

"And we will continue to enforce our own laws even if the federal government rolls theirs back."

Those opposed to the changes in auto emissions and fuel economy included community activists like Kerene Tayoe, from "Green for All."

"We are totally against the rollback, they say this rule is gonna be safer, we say that it's not. The current standards in place over ten years have benefitted communities already that have produced cars that are more fuel efficient.

And David Reichmute of the Union for Concerned Scientists

"We oppose any changes to the standards, the rollback it is completely unjustified by the science."

Dr. Jose Vempilly a lung specialist with the University of Californian San Francisco's Fresno center says he fears any rollback will further impact those with heart and respiratory problems in the Central Valley.

"This is a pivotal time we have to be progressive with our policies and have even more stringent standards. Merely from a health point of view, this will be a complete reversal."