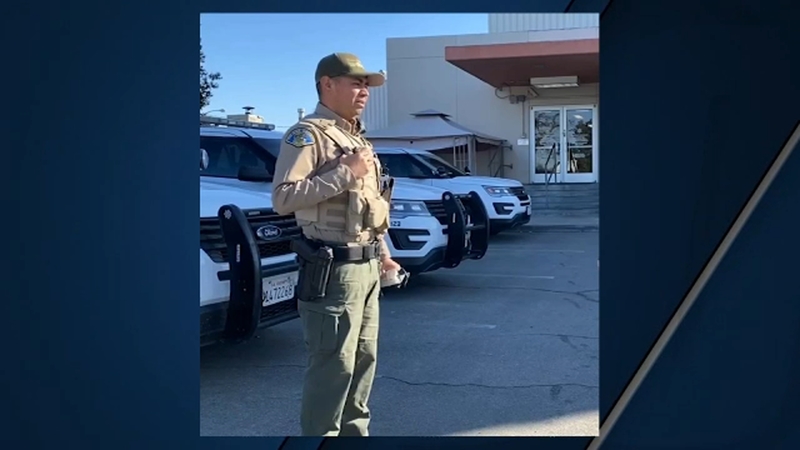 FRESNO, Calif. (KFSN) -- Tulare County Sheriff's patrol deputy Luis Araujo was named officer of the year by the Knights of Columbus in February of 2020.

In a video produced by the sheriff's office at the time, his superiors praised him as a leader and mentor to newer deputies.

But shocking new allegations against Araujo threaten to tarnish the deputy's reputation, and could potentially send him to prison.

On Friday night, Hanford Police arrested the 40-year-old after a woman accused him of raping her at a home on the city's north side.

BREAKING: Hanford Police arrested Tulare County Sheriff’s deputy Luis Araujo over the weekend after a woman said he raped her. More on @ABC30 at 5.

Picture below from @TulareSheriff shows Araujo (center) receiving an officer of the year award in 2020. pic.twitter.com/2GBpM9oqXg

"I believe they contacted both individuals at some point, and they received a statement from the victim as well as the suspect," Hanford Police Chief Parker Sever said.

Sever says they he can't release specific details about what happened, and can't disclose the relationship between the woman and Araujo, other than they were not boyfriend and girlfriend.

Araujo bailed out of jail hours after his arrest.

"The Tulare County Sheriff's department has been very cooperative with us and just wants a thorough investigation as to what happened in this case," Sever said.

This is the second arrest of a Tulare County Sheriff's Office employee in recent days.

On Saturday, correctional deputy Roman Garcia was arrested by members of his own department.

He's accused of making criminal threats and intimidating a witness.

This is an off duty related allegation and it is important to allow time for a thorough investigation.

Immediately upon learning of the allegations he was placed on administrative leave pending the outcome of a criminal and internal investigation.

Deputy Luis Araujo is a four year employee and is currently assigned to patrol.

The Sheriffs office is asking for a complete and thorough investigation to determine the facts of the case.

Due to this being a personnel matter, we appreciate that you understand we are not legally allowed to discuss the matter.