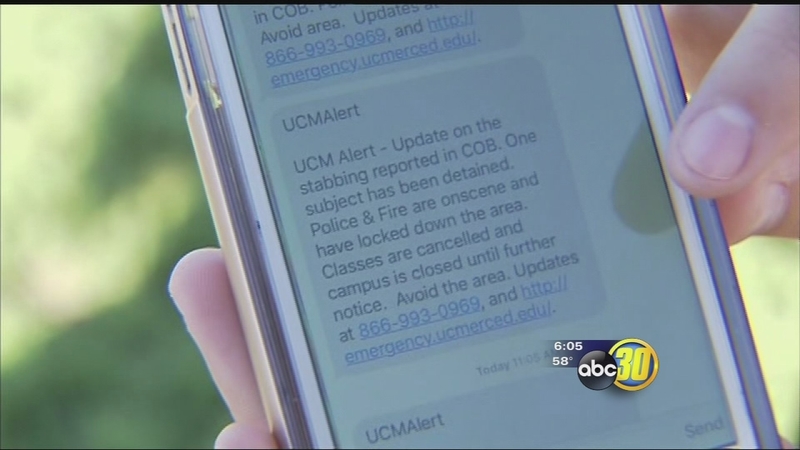 MERCED, Calif. (KFSN) -- Officials prepare constantly in case an emergency occurs on campus and on Wednesday that training was put to the test.

UC Merced has a widely used, and highly effective, system called, "UCM Alert." The notification system didn't just keep students safe, it helped let everyone here know what was happening and what to do. Jaquelin Martin was in her dorm when a text message and alert came through on her phone. "UCM alert, stay in your dorms, keep safe."

Just minutes after four people were stabbed on UC Merced's campus students were notified, through the UCM Alert system, that a stabbing had taken place in the Cob building and to avoid the area. "It happened before 8 and I got it right at 7:58," said Martin.

The alert was enough for Martin to know to stay in her dorm for the next two hours until she received more alerts telling her it was safe to leave. "and then there was another one saying classes are canceled, and then the last one was the suspect is no longer a threat."

UC Merced Chancellor, Dorothy Leland, said she and other administrators are pleased with how the emergency alert system worked. "We sent these messages on about 15-minute intervals on the initial stages of this incident, because we wanted to double, triple, quadruple ensure that students got the messages."

Kimberly Peralta was in the Cob building when the stabbing happened. She thinks the alert system avoided confusion and quickly helped people get to safety. "I think they did a great job, although I wasn't paying attention to my phone, but people around me were so it definitely worked."