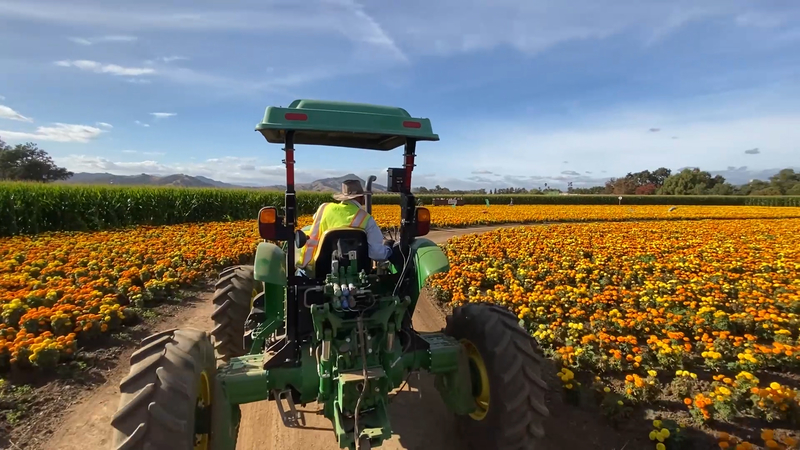 SAN MARTIN, Calif. -- Uesugi Farms Pumpkin Park is a hidden Halloween gem. Nestled in the South Bay, the farm houses tens of thousands of pumpkins and pumpkin based attractions that have been a tradition of so many families for more than 30 years.

People have come to the patch as kids and now are bringing their own kids still to this day to relive memories and see the beautiful sights of the pumpkin farm.

Best part of telling the stories of where you live? You get to try things you’ve never done and always wanted to! Check out me shooting pumpkins at Uesugi Farms! (I went 0/3 on the targets 😂) pic.twitter.com/1NXGRxKDMR

"At Uesugi Farms, we pride ourselves on being family friendly always," Uesugi Farms School Tour Coordinator Vicki Baroff said. "It's an honor for us to be part of so many family traditions. People come every year, mom, dad and grandparents. The biggest compliment that we get is how pretty the pumpkin patch is. This place is beautiful. I think a lot of people come to visit from the Bay Area because they don't get to see the fresh flowers, the hay bales or the corn."

Baroff has been working as the School Tour Coordinator for the past three years, but her time at the pumpkin farm dates back to when it opened in 1985.

"I think coming back to work at the patch every year is a tradition for my family," Baroff said. "My parents started here when it first began. We all enjoy what we're doing and seeing the looks on the children when they come here. It's a very fun place."

There are so many fun attractions to try out including pumpkin blasters that shoot mini pumpkins at targets.

The train is always a fan favorite as it takes you around the park.

Children can try to spot the golden pumpkins along the trail.

Another big draw comes from their hay ride that goes through fields of sunflowers, pumpkins and marigolds.

Other attractions include the big slide, the corn mazes and the cow train.

Looking for something fun to do before Halloween? Why not check out Uesugi Farms in San Martin! You can get lost in Kayla's Corn Maze like I almost did. pic.twitter.com/du426gDqUg

Tickets for each attraction can be purchased on location.

Another item to be purchased is the array of pumpkin foods that are special made for Uesugi Farms.

They have classics like pumpkin pie and pumpkin bread, but they also have pumpkin ice cream, pumpkin fudge and even cotton candy.

ABC7 Community Journalist Dustin Dorsey put his taste buds to the test and tried the foods for us.

Another favorite part of mine of Uesugi Farms? THE FOOD! They take pumpkin spice everything to the next level. Check out these Halloween treats! pic.twitter.com/9ujAOm9V7l

Although the farm is under new ownership, they continue to try and re-create the original image, while adding new attractions to make their farm even better.

In a world that changes every day, Uesugi Farms hopes to be a constant and a tradition for families all across the Bay Area.

"True farmers started this pumpkin patch and they wanted it to look like you were at a real farm," Baroff said. "We're very proud of that and people still enjoy coming. We're going to strive to keep it the way that it is for as long as we possibly can. We hope we can continue to bring families in and start new family traditions for new families as well."