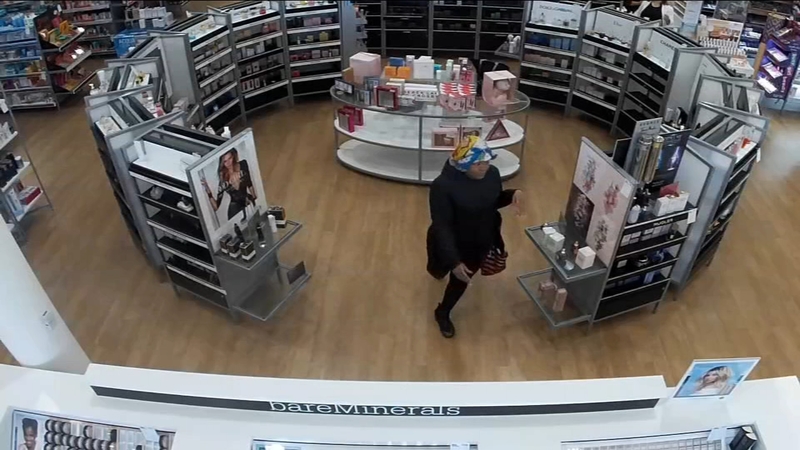 FRESNO, Calif. (KFSN) -- The search is on for a suspected beauty bandit with expensive taste who's wanted in a number of robberies at Ulta stores. The latest heist happened at the retailer's Northwest Fresno location at Herndon and Highway 99.

She was arrested on Sunday hours after thousands of dollars in high-priced fragrances were taken from the Ulta in the El Paseo Shopping Center.

Surveillance video shows the suspect shoveling fragrance bottles into a large tote bag. Within seconds, suddenly she makes a dash for the door. Concerned employees chase after her but she's too fast. She didn't stick around long with her purse full of perfume - officers say she apparently headed north on Highway 99 to the next burglary.

"Later on that day, the same thing happened and because we had worked with the people in Ulta at our town- we communicated that up and down the state and Modesto Police said we'll take her into custody," said Capt. Burke Farrah of the Fresno Police Department.

She bailed out - just as Fresno Police Officers got a warrant for her arrest. So she is wanted once again.

Just three weeks ago- the Ulta in the Villagio Shopping Center on Blackstone near Nees was also targeted- only four suspects were in on this crime. Officers don't know if Shante Lewis was involved in that burglary- but they have tied her to at least 4 others.

Police believe that she's responsible for multiple thefts up and down the state of California.

Detectives aren't sure if she acted alone in the latest Fresno crime, but they know she is focused on fragrances and completes the crime in a few minutes at the most.

Investigators think she may be in Northern California now. They've warned all California ULTAs to be aware of her potential return.
In the latest theft- the losses were about $2,300.

Officers say the easy ability to resell these items means guaranteed quick money for the suspect.

Shante Lewis is a former Fresno resident. If you see her or know where she is, you can call Crimestoppers and earn a cash reward.