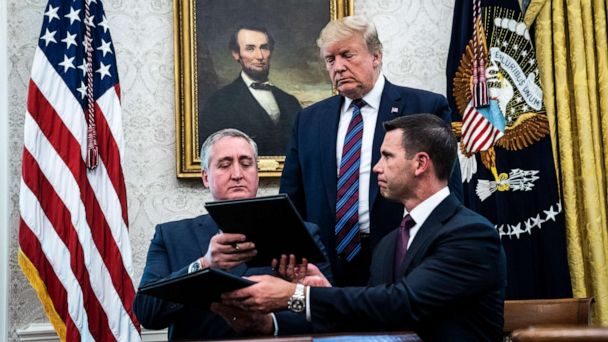 While Guatemala's newly elected president said he cannot implement a migration deal his predecessor signed with the Trump administration, the State Department said Friday the two countries are working to implement it.

The agreement would allow the U.S. to deport migrants seeking asylum in the U.S. to Guatemala if they passed through that country on their way to the southern U.S. border.

It's a controversial deal that critics say is inhumane and illegal because Guatemala is not a safe or developed enough country to accept asylum seekers and does not have the legal infrastructure to process asylum claims. But for President Donald Trump, it is critical to his plans to prevent more migrants from reaching the U.S. border.

"In order to be a safe country, one has to be certified as such by an international body, and I do not think Guatemala fulfills the requirements to be a third safe country," said Guatemala's President-elect Alejandro Giammattei, according to an Associated Press report Wednesday.

Giammattei was elected in a runoff last weekend, but will not take office until next January. He told the AP his government does "not have the capacity for our own people," let alone migrants from neighboring El Salvador, Honduras or elsewhere.

But a State Department spokesperson told ABC News, "Both governments are working toward implementation of the July 26 agreement."

"We look forward to working with the Giammattei administration in areas of mutual interest, including addressing the underlying economic, security, and governance challenges that drive irregular migration," the spokesperson added.

Giammattei spoke by phone with Secretary of State Mike Pompeo Thursday. A readout from Pompeo's spokesperson Morgan Ortagus made no mention of the deal, but said Pompeo "recognized our close partnership in addressing illegal migration" during the call.

The Guatemalan embassy in Washington did not respond to requests for comment.

Trump had publicly pressured the current Guatemalan president, Jimmy Morales, to sign a deal in July, threatening a "ban" or tariffs after Morales was forced to back out of signing a similar deal the week prior because of political pressure and a legal challenge back home.

The deal is still not in effect yet and must first pass "several procedural steps in both governments to ratify and recognize" it, acting Homeland Security Secretary Kevin McAleenan told reporters in July, adding he thought it could be done in "several weeks" and be "up and running" in August.

Rather than moving to scrap the deal, however, Giammattei seems to be pushing the U.S. to make changes. He told the AP that annexes to the agreement are still being negotiated and members of his transition team should be involved in those talks.

Among the changes Giammattei hinted at is pressing the U.S. to provide more assistance to Guatemala. The Trump administration cut $370 million of funding earlier this year to Guatemala, Honduras and El Salvador, blaming them for not doing enough to stop migration. Critics, including Republican lawmakers, said the cuts impeded Trump's stated goal, undermining U.S.-backed efforts in those countries to stem migration.

The deal would also have to be ratified by both countries' legislatures, he said, especially in Guatemala, where the country's highest court has already ruled that the legislature must weigh in.

There has been widespread criticism of the deal in Guatemala, and U.S. refugee and human rights groups say such an agreement imperils migrants, given Guatemala's dangerous crime rate and gang violence and lack of a proper asylum system.
Report a correction or typo
Related topics:
abc newsnational
Copyright © 2020 ABC News Internet Ventures.
More Videos
From CNN Newsource affiliates
TOP STORIES