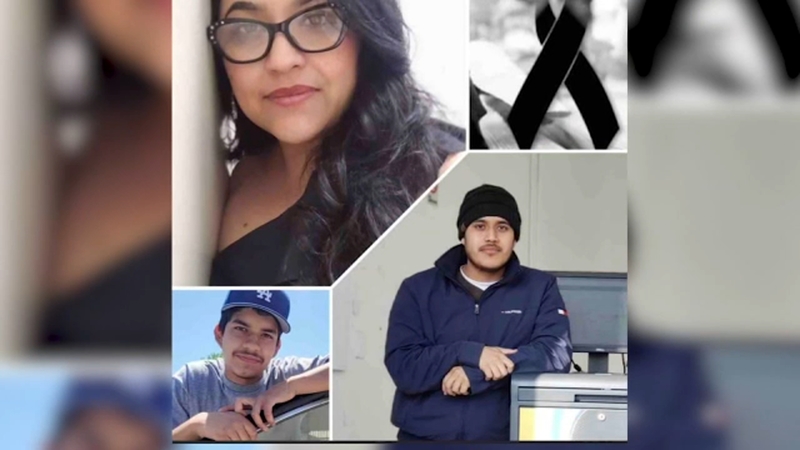 People in the city of Wasco joined together Tuesday night to remember a mother, her two sons, and fallen Kern County Sheriff's Deputy Phillip Campas.

Those who knew the family said they don't know why this happened.

"You are not alone, just look around you to all those people who are here today," said a pastor who started off the vigil held in downtown Wasco Tuesday night.

Hundreds of people gathered to remember the victims killed in a domestic violence hostage incident Sunday.

Hundreds have gathered in downtown Wasco to hold a vigil for the fallen deputy & family members who were killed Sunday. @ABC30 pic.twitter.com/sLhQnCyCR0

Wasco's Mayor Alex Garcia said this was a chance for people to mourn and begin to heal.

"It's so crucial now more than ever that we wrap our arms around our community at this time. Tragedies such as these, you never believe for them to happen in your hometown," Garcia said.

Mental health services were on hand as community leaders spoke out.

RELATED: Kern County Sheriff's deputy among 5 shot and killed during standoff in Wasco

Officials said he also shot and killed Deputy Phillip Campas, who was part of the SWAT team trying to get to the victims.

According to a GoFundMe set up on behalf of the Ramirez family, 42-year-old Viviana Ramirez ran a successful photography, invitation and custom T-shirt business.

Jose Ramirez, 24, had just started his own business in Delano. Angel Ramirez, 17, was running a popular muffler shop in Wasco.

"It's a sad deal, but they're good people," said Juan Gallardo, who knew the family. He's the wrestling coach at Wasco High School and coached Jose Ramirez and his older brother, who was not involved Sunday.

Gallardo said Jose was a quiet, good kid who loved to workout. Gallardo said he picked up the boys from their home countless times.

"The mother was a good mother, she was very kind, 'Hey coach, what do you need, coach?'. Every time I saw her, I walk up to the front door, 'Coach, they're coming out coach.' Those type of things," Gallardo said.

Gallardo said the entire community is still trying to wrap their minds around what happened.

In Bakersfield Tuesday afternoon, a procession was held for Deputy Phillip Campas as he was taken to Greenlawn cemetery.

The @KernCountyDA talked about Deputy Campas rushing in to try to help the victims and lost his life. “He died a hero.” @ABC30 pic.twitter.com/FBTfEp82Pq

Flags have been ordered to half-staff until further notice as a sign of service and sacrifice of Deputy Phillip Campas.

There is another vigil planned for Friday night in Bakersfield.

There are multiple fundraisers set up for the Ramirez family and Deputy Campas's family.

Zelle for the Ramirez family - nenado404@yahoo.com

Friends of the Ramirez family are also selling plates of food for donations that will go directly to the family. It will be given on a first-come, first-served basis starting at noon Wednesday until food runs out.