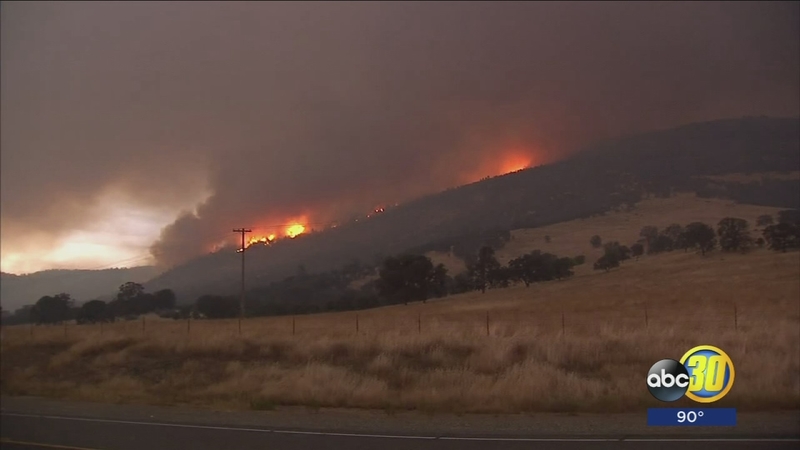 MARIPOSA COUNTY (KFSN) -- The fire started on the west side of Mariposa County and jumped to the east by Monday afternoon. Beneath these hills lie thousands of acres of cattle ranch land.

As the day grew darker, John Sanchotena Jr.'s fear loomed larger as he waited nervously by the family's cattle ranch while watching the orange embers fly by.

"We were not prepared for this whatsoever," he said.

While sheriff's deputies herded up families down the road, Sanchotena and his father rounded up their cattle. Their every step was at the mercy of the wind.

"He's kind of keeping all of our cows together, in case it jumps the highway again," he said. "We either have to start cutting fences or let them run."

Firefighters say they have never seen a wildfire shift directions so erratically, crisscrossing mountain ridges and trying to jump the highway at every turn. It's forcing firefighters to constantly shift positions.

"I haven't seen these conditions in a long time, it's a wind driver, slope driven, fuel-driven fire," Jerry Fernandez with Cal Fire said.

By Monday evening, the fire jumped a portion of Highway 49. Firefighters were able to stop it from leaping across again, just feet away from the Sanchotena Farm.

"I almost had to use it. This is to cut the barbed wire," Sanchotena Sr. said.

So far, only one structure has been destroyed but countless acres of feed was lost. And the Sanchotenas are safe on the western front, but now they have to worry about an attack from behind.

"I don't wish harm on anybody, but I hope it just keeps going over the hill and doesn't keep coming down," Sanchotena Sr. said.