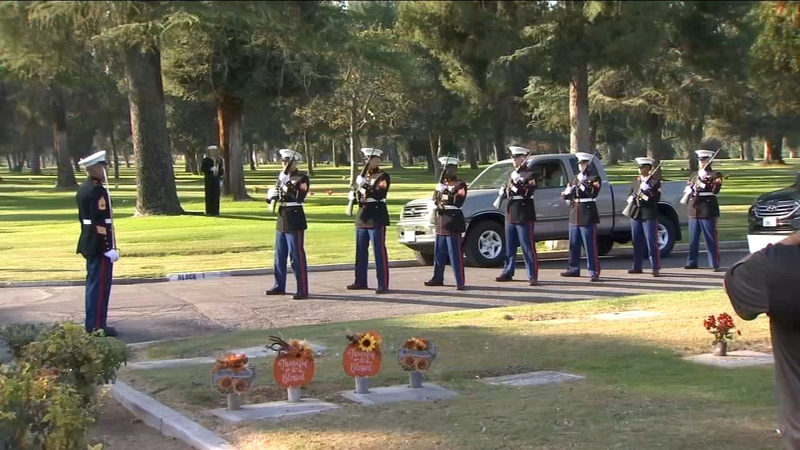 FRESNO, Calif. (KFSN) -- Sgt. Dwight Randall, a Fresno Marine, was killed 75 years ago during the invasion of a Japanese-held island in the Pacific. He was given a belated goodbye on Tuesday.

On November 20, 1943, the devastating assault on the Tarawa atoll in Japan by the US Navy began. Big guns attempted to soften the Japanese defenses so the Marines of the second Division could land. But the dug-in Japanese were not easily dislodged.

Sgt. Dwight Randall was piloting one of the landing crafts, amphibious tractors or LTVs , carrying the first wave of Marines to shore. Commander Carl Rhoads, the US Navy Chaplain from the Lemoore Navai Air Station remembered the sacrifice at Randalls funeral in Fresno.

The LTVs made it safely over the coral reefs, but once over that, they began taking heavy fire from the shore. The Japanese fire destroyed 8 LTVs during the initial assault.

Randall's body was recovered from Tarawa after the war, sent to Hawaii, where eventually experts went to work trying to identify the remains.

"My aunt was contacted five years ago from Quantico. She was the only living relative asked for a DNA test," said Sandi Flockhart, one of Dwight Randall's nieces.

The results were not finalized until September of this year. The aunt passed away waiting, but Flockhart says the dozens of nieces, nephews and cousins of Sgt. Dwight Randall were anticipating this final chapter.

About 75 years from the day of his death on Tarawa, Dwight is home with his family and his family finally has closure.

The young marine received a military burial, and a final goodbye from his family.