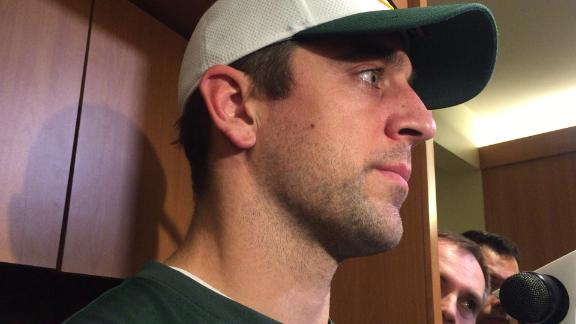 That's at least part of what quarterback Aaron Rodgers believes has slowed the Packers' struggling offense. He spent a good portion of his Sunday session with reporters talking about how the team's preparation needs to be better than it has been during a stretch of four losses in the past five games.

"It goes back to what you're doing in your spare time and what you're doing with your time in the facility," Rodgers said. "Being a pro is all about making sure you're as ready as possible by the time the game hits. I think that's the important thing for guys to remember here, especially young guys.

"We're 15 games into the season, counting preseason. That's a long grind for those guys, especially the rookies. This is the time where they really got to get through that wall, and the vets -- the vets have had some [missed assignments] as well. So we've got to buckle down our preparation and make sure we're ready to play."

However, Rodgers said it has not reached the point at which the team would call a players-only meeting, despite a mention of one during NBC's telecast of the Packers' 17-13 loss to the Chicago Bearson Thursday.

During the third quarter, NBC analyst Cris Collinsworth said, "They had a little players-only meeting this past couple weeks ago before that Minnesota game. I don't think Aaron Rodgers was too happy with the preparation schedule of some of the young players on this team. A few too many video games being played and not enough homework."

Coach Mike McCarthy said Sunday that he was unaware of any such meeting, and Rodgers said there was no meeting.

"First of all, it's false," Rodgers said. "It didn't happen in the way that he explained it. I saw something about guys were worried about people playing video games. Sometimes, in those production meetings, obviously, the message doesn't get conveyed the right away or whoever [NBC sideline reporter] Michele [Tafoya] talked to or Cris, I don't know what he was referring to there, but I heard the comments, and it's just not true.

"There wasn't any players-only meeting, no. There's meetings with the offense all the time. We break up offense and defense, we break up into position groups, but there wasn't anything resembling what he talked about, from what I heard. I didn't see the broadcast."

Still, preparation has been brought up several times in the past month, and it remains a fresh topic in advance of Thursday's game at the Detroit Lions.

"We have been talking a lot more about preparation," McCarthy said. "I think anytime you go through an NFL season, there's key points in every season. Coming into the holidays, it's always a big reminder that I give to the younger guys. Their demands are going to go higher, and they need to do a better job when they're here at work. Those kind of preparation conversations go on all the time. Now, there's been more to talk about on offense because of the lack of production."

After the Thanksgiving loss to the Bears, a game in which Rodgers and his receivers looked out of sync, the reigning NFL MVP said he was going to take it upon himself to make sure his preparation is at an all-time high in order to fix a passing game that has slipped to 23rd in the league.

"You know, you've got to be able to look in the mirror and feel good about the preparation every single day," Rodgers said Sunday. "You need to think about if you accomplished everything you want to accomplish. If you didn't, you take your stuff home, and you look at it. You probably should take your stuff home and look at it anyway. This time of year, I always feel, helps with the preparation because it's so cold outside. There's not much going on, so you've got no excuses not to get in the iPad, get in your book and get ready to play."