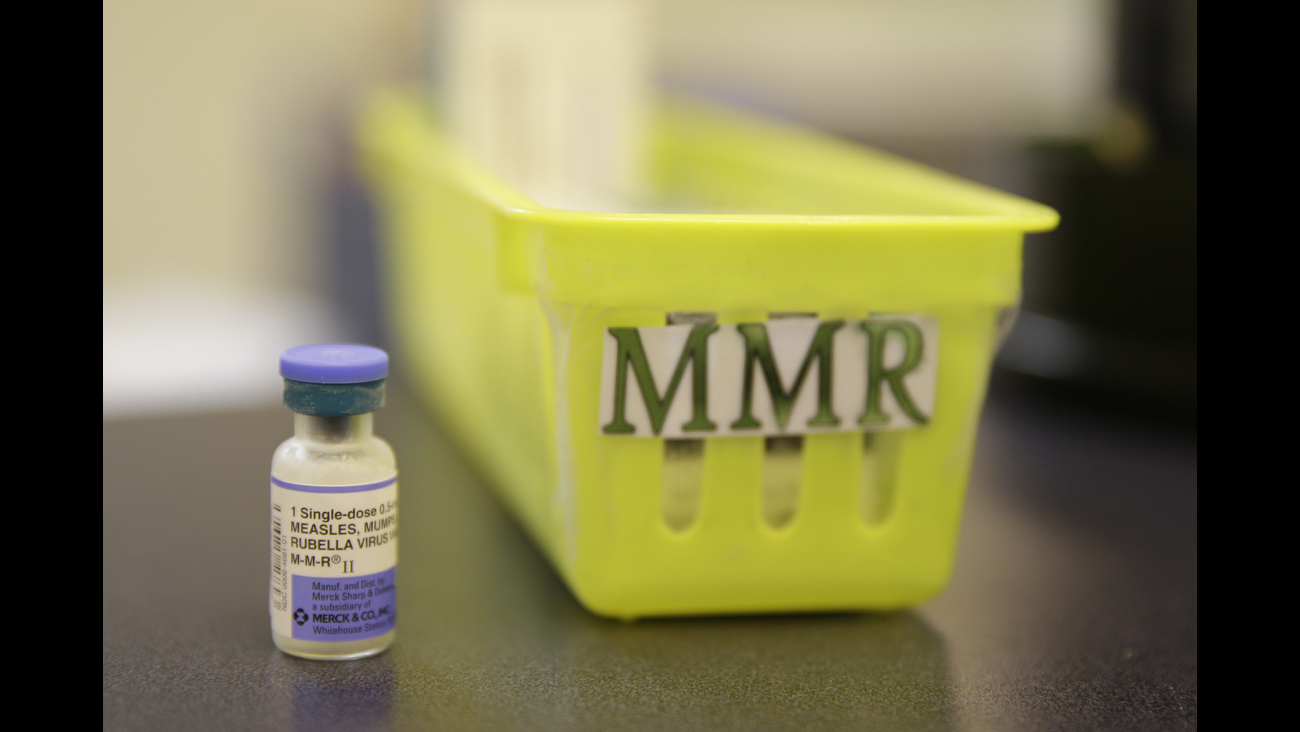 FILE - This Feb. 6, 2015, file photo, shows a measles, mumps and rubella vaccine on a countertop at a pediatrics clinic in Greenbrae, Calif. (AP Photo/Eric Risberg, File)

VANCOUVER, Wash. -- A measles outbreak in the Pacific Northwest became more worrisome Wednesday with word that people infected with the extremely contagious viral illness traveled to Hawaii and central Oregon after being exposed.

The revelation prompted public health officials in Oregon's Deschutes County and in Hawaii to issue alerts, although no cases were confirmed in either location.

"It raises concerns that this can go on for a long time, become geographically larger than it is and more cases over weeks and months," said Dr. Alan Melnick, public health director for Clark County, in southern Washington, which is at the epicenter of the outbreak and has a lower-than-normal vaccination rate.

There are 40 confirmed cases in the Northwest, including 38 clustered in southwest Washington, one in Portland and one in Seattle. Thirteen additional suspected cases were reported Wednesday, and some of those will likely be confirmed, Melnick said.

Officials haven't yet determined how the measles outbreak started. The first patient sought medical care on Dec. 31, but other sick people may not have gone to a doctor or hospital, he said.

Clark County, where the first case was documented, has a 78 percent vaccination rate - far below the 95 percent required for "herd immunity" for such a contagious virus.

Herd immunity, or community immunity, is when enough of the population is vaccinated to protect those who haven't been vaccinated for medical reasons or because they are too young.

"If you have a large unvaccinated population and you add measles to the mix, one measles case will infect 90 percent of contacts, and the early symptoms are not distinguishable from other respiratory illnesses - and you're contagious at that point," Melnick said.

"So it's like taking a lighted match and throwing it into a bucket of gasoline, basically," he said.

Washington Gov. Jay Inslee last week declared a state of emergency because of the outbreak, and the federal Centers for Disease Control and Prevention has been consulting with local and state officials.

Two children who traveled to Hawaii were not contagious when they flew, Melnick said, and they were quarantined in the islands once they arrived. They have since returned home.

Of the confirmed cases, most patients were under 10 and at least 34 patients were not immunized. One dose of the measles vaccine gives 93 percent lifelong immunity; a second dose between ages 4 and 6 provides 97 percent immunity.

The vaccine has been part of routine childhood shots for decades, and measles was declared eliminated in the U.S. in 2000. But it is still a big problem in other parts of the world, and travelers infected abroad can bring the virus back and spread it, causing periodic outbreaks.

Last year, there were 17 outbreaks and about 350 cases of measles in the United States.

Before mass vaccination, 400 to 500 people in the U.S. died of the measles every year, 50,000 people were hospitalized and 4,000 people developed brain swelling that can cause deafness, Melnick said. One to three cases out of every 1,000 are fatal, he said.

People who think they may have the measles should call their health care provider before showing up so the facility can take steps to limit other people's exposure.

Early symptoms include a fever, runny nose and malaise, followed by a red rash that starts around the head and moves down the body.