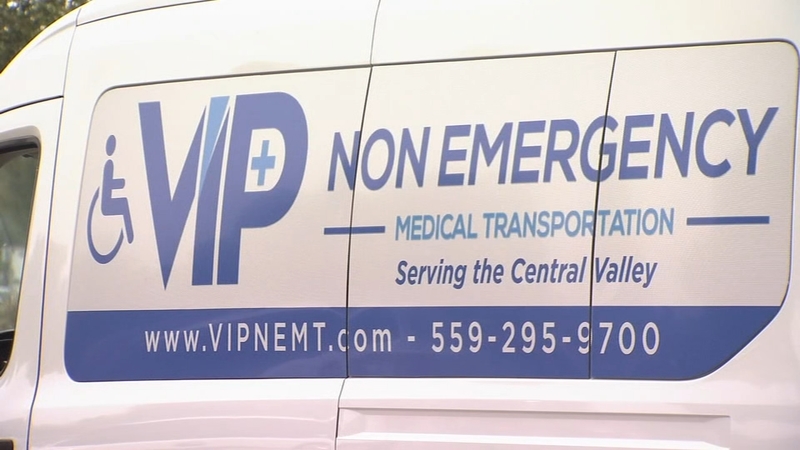 NORTH FORK, Calif. (KFSN) -- Sandra Anderson's pets and belongings are being unloaded at Clovis North, where the Oakhurst resident is now getting help from the Red Cross.

The town is under an evacuation warning, but she decided she wasn't going to wait for an order.

Anderson says leaving wasn't easy as both her cars were recently vandalized.

She's also a caretaker for Bob Simon, who uses a walker and has dementia.

Anderson didn't know what to do until she learned that a local non-medical transportation company was helping get evacuees to safety.

"They came in an hour, loaded three geese, three screaming cats and a dog as big as Texas. I don't know what we would've done. I was going to call 911 to have them help us," she says.

Ryan Lacefield of VIP Non-Emergency Medical Transportation LLC says they shifted their focus to helping anybody who's elderly or handicapped evacuate quickly and safely, free of charge.

They've gotten dozens of calls for help in areas such as Prather and Oakhurst.

"It's sad to hear someone loses their life because they couldn't get out to safety. I couldn't imagine being in that position and I don't want anyone to be in that position," says Lacefield.

On Tuesday, smoke filled the sky in Madera County and flames could be seen on the mountainside near North Fork, which is under a mandatory evacuation.

Matthew Hamlett with Yosemite Vacation Homes in Oakhurst is opening the doors to his rental properties for evacuees to use as shelter for now.

"I had phone calls yesterday all the way until 2 o' clock in the morning to get placement and this morning we have a waiting list of 20 people. Last night we were able to place 10 families," says Hamlett.

No additional evacuation orders or warnings were issued for the county on Tuesday but as the creek fire grows in size, the Red Cross decided to pack up its Oakhurst evacuation center as a precaution and move it to the Mariposa County Fairgrounds.

Anderson hopes the fire won't reach her home but she says she has everything she needs with her as she hopes for the best.