KFSN
By ABC30.com staff
FRESNO, Calif. (KFSN) -- A powerful 7.1 earthquake shook Southern California, cracking buildings, breaking roads and causing power outages on Friday, just one day after a magnitude 6.4 hit the same general area -- while seismologists warned that large aftershocks were expected to continue for days, if not weeks.

The quake, centered 11 miles from Ridgecrest area, struck at 8:19 p.m. and was originally listed as a 7.1, was downgraded shortly after and then upgraded back to a 7.1. Friday's earthquake was about 10 seconds longer than the quake on the Fourth of July in Searles Valley.

RELATED: Businesses cleaning up after 7.1 magnitude earthquake near Ridgecrest

Friday's temblor is the largest Southern California quake in at least 20 years and was followed by a series of large and small aftershocks, including a handful above magnitude 5.0.

Seismologists said on Saturday that they had measured at least 2,600 aftershocks of magnitude 3.0 and greater. And by the time they finish analyzing all the data, they'll expect to catalog 30,000 of 1.0 magnitude or greater.

Caltech seismologist Egill Hauksson said the likelihood of another earthquake in the area of 7.0 or greater is now 3%, down from the 6% probability estimated on Friday.

"So we're likely to see maybe one or two of those in the next week," Hauksson said Saturday morning.


The area in and around Ridgecrest, already trying to recover from the previous temblor, took the brunt of damage. Kern County fire officials reported "multiple injuries and multiple fires" without providing details. San Bernardino County firefighters reported cracked buildings and a minor injury.

"We know of no fatalities. There have been a lot of ambulance calls for help," Kern County Fire Chief David Witt said at a news conference. "We're launching a lot of people ... I am very confident that we can take care of the situation."

Seismologist Dr. Lucy Jones said the 6.4 is now a foreshock, and another 6.0 quake "would not be surprising." The new, larger quake was on the same fault and part of the same sequence.

So the M6.4 was a foreshock. This was a M7.1 on the same fault as has been producing the Searles Valley sequence. This is part of the same sequence -

There is about a 1-in-10 chance that another 7.0 quake could hit within the next week. There is a 9 in 10 chance that the 7.1 will be the largest in Searles Valley. Jones said aftershocks from the new main quake could occur for three years.

"Like any quake, today's (Friday's) M7.1 has a 1 in 20 of being followed by something even bigger. Smaller quakes - M5s are likely and a M6 is quite possible," Jones said in a tweet.

An earthquake on the evening of July 5 was felt around the greater Los Angeles region.

Gov. Gavin Newsom said President Donald Trump has called him and expressed commitment to helping California recover from two earthquakes that hit the state in as many days.

Speaking to reporters after touring the damage zone, Newsom said Saturday that he and Trump talked about the struggles California has been through, including two devastating wildfires that happened just six months ago.

The Democratic governor said "there's no question we don't agree on everything, but one area where there's no politics, where we work extremely well together, is our response to emergencies."

"He's committed in the long haul, the long run, to help support the rebuilding efforts," Newsom said of Trump.

WATCH: Gov. Gavin Newsom speaks at a press conference in Ridgecrest on the day after a 7.1 earthquake.


Newsom activated the state Office of Emergency Services operations center "to its highest level." Soon after, a state of emergency was declared for San Bernardino County. The governor requested that President Donald Trump issue an emergency declaration so the state could receive federal aid.

“In response to another large earthquake in Southern California tonight, I have activated the @Cal_OES state operation center to its highest level, and the state is coordinating mutual aid to local first responders.” - Governor @GavinNewsom

That includes resources from the Regional Task Force Five Urban Search & Rescue team based in the San Joaquin Valley. A crew of 27 will be sent with members from fire departments in Fresno, Clovis, Selma, Merced, and CAL FIRE Fresno.

People reported feeling the earthquake in areas as far as San Francisco and Las Vegas.

The quake was felt in the San Joaquin Valley as a rolling motion that seemed to last at least a half-minute. 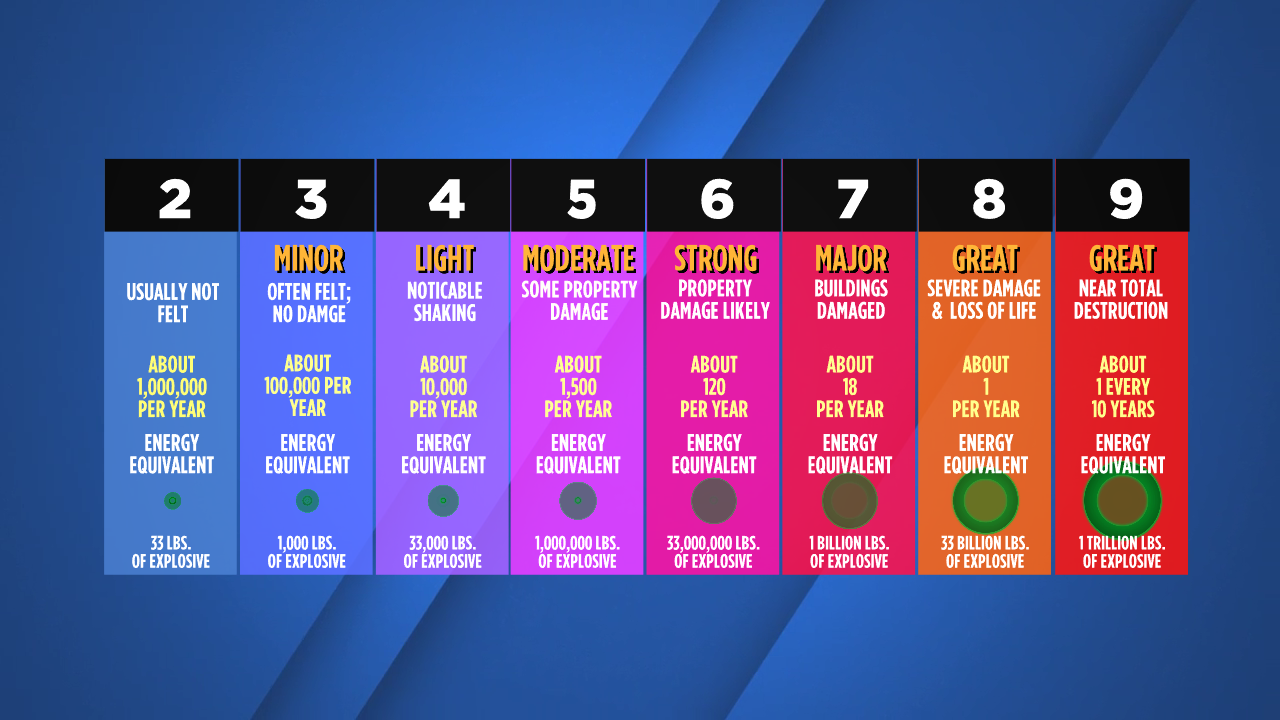 Seismic magnitude scale helps to evaluate the severity of an earthquake. (KFSN)

The U.S. Geological Survey said it also was felt in Mexico.

An NBA Summer League game in Las Vegas was stopped after the quake. Speakers over the court at the Thomas & Mack Center continued swaying more than 10 minutes after the quake.

Dramatic video showed Dodger Stadium shaking during the temblor during the home team's game against the San Diego Padres. But the game went on, and the Padres won, 3-2.

"Not many people can say they threw a strike during an earthquake," Eric Lauer, who was on the mound at the time, said later. "My ball, my pitch, started an earthquake."

Power outages have been reported in Kern, Inyo and San Bernardino counties, according to Southern California Edison. About 13,000 people have no electricity in the Ridgecrest area.
Crews caution everyone that if they see a downed power line to assume it is charged and to stay away.

The California Highway Patrol in Bakersfield says large rocks are on State Route 178 through the Kern River Canyon, which has been shut down.
EMBED More News Videos

A rock slide caused by a powerful 7.1 earthquake has part of Highway 178 at a standstill in the area of Ridgecrest. (Lisa Brunson)