KGO
By by Nick Smith 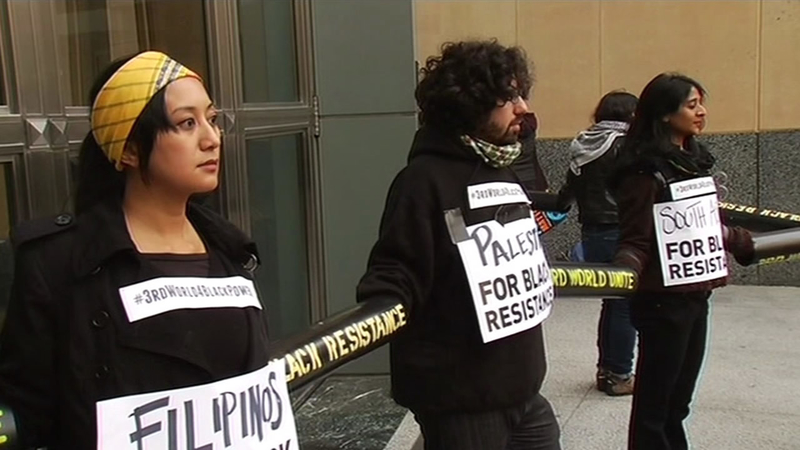 OAKLAND -- About 25 activists locked themselves together to block two entrances of the Ronald Dellums Federal Building in Oakland Friday morning.

The activists locked their arms together using sections of PVC pipe and are blocking the two main entrances of the downtown Oakland building.

Protesters first locked themselves to the building at about 5:30 a.m. and a crowd of about 150 people has grown steadily throughout the morning.

The protesters say they are there to link the struggles of people in developing nations to movements for black civil rights in the U.S. The protest was organized by groups including the Haiti Action Committee and the Arab Resource and Organizing Center.

Sky7 HD was over the scene when over 100 demonstrators chained themselves to the entrances of Oakland's federal building, while other members of the group danced, chanted and said prayer.

"King's legacy has been sanitized over the years, but the truth is that he believed in non-violent direct action, so you're going to see that spirit on both sides of the bridge for the next 96 hours," Onyx Organizing Committee spokesperson Cat Brooks said.

Organizers are planning four days of non-violent demonstrations over the holiday weekend.

Employees were shuffled to side entrances and given access to enter after showing identification during the protest happening in front of the building. Demonstrators weren't the only ones making their presence known as federal protective service police kept their distance, but also a watchful eye.

"Our mantra for the weekend is block stuff not break stuff," one woman said.

Demonstrators say they targeted the federal building because of what they call its role in promoting a war on black people.

With neither side showing any sign of backing down, demonstrators could be settling in for a long four days.

Caught in the middle are people who simply want to get to where they're going, without being delayed.

Demonstrators anyone moving in and around the Bay Area should be prepared to have a spontaneous demonstration happen anywhere at any time.

"We been asking for 450 years to be treated like human beings. We've asked nicely, we've prayed, we've marched we've sung. You didn't like us then, so if you don't like us now when we standing up and demanding an end to being treated like animals, that's your issue not ours," Brooks said.

Organizers have been in touch with federal protection police the entire time. The protests have been completely peaceful and there have been no arrests.