The popular digital media company is paying their bills until the economy reopens.
KFSN
By Jason Oliveira 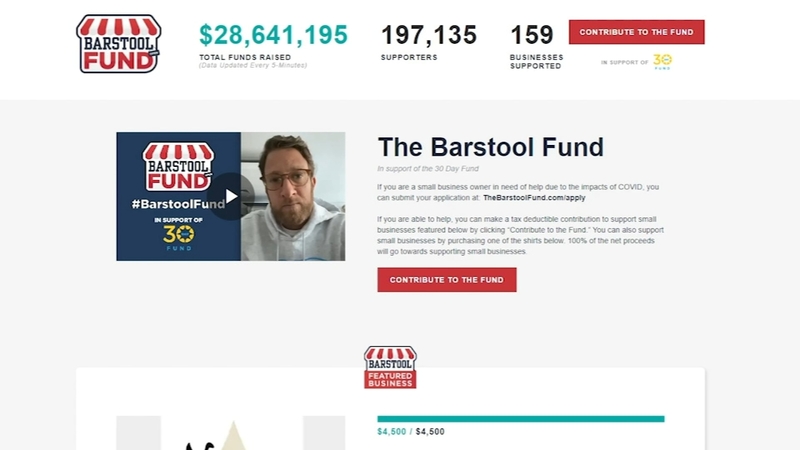 FRESNO, Calif. (KFSN) -- Two Fresno business owners have a big reason to celebrate after receiving a financial lifeline from Barstool Sports and its founder Dave Portnoy.

"Hopefully we can save as many small businesses as humanly possible," said Portnoy.

The popular digital media and sports company is focused on helping small businesses survive the health crisis, by paying their bills until the economy reopens.

The fundraiser started a month ago and has raised nearly $29 million.

During that time, Barstool Sports has helped more than 160 businesses nationwide, including the Dance Studio of Fresno and the Spa and Hungry Hair.

"To qualify for money from us you still have to be paying your employees, your payroll has to be on," said Portnoy.

Celebrities like Guy Fieri and Aaron Rodgers have jumped on board to help the fund swell into the tens of millions.

Tammie Riley's daughters submitted a video on their mom's behalf

The owner of The Spa and Hungry Hair Salon admits she had no idea about the fundraiser or what Barstool Sports even was but she quickly learned after receiving a FaceTime from its founder this week.

"Being that we're only 25% open but still have all of our bills this will help with the other part of it," said Riley.

Sue Sampson-Dalena, owner of the Dance Studio of Fresno declined to answer the first couple of times Portnoy tried to reach her because she didn't recognize the number.

Her son Nate is the one who pieced together her application video.

"The stress that I've been under personally, my husband and I, has been pretty overwhelming at times. You don't want to see something I've built close because of this horrible virus. All I can say is thank God for Dave and people like him," said Sampson-Dalena.

The list of companies helped by the Barstool Fund grows every week and comes with the promise of paying their bills every month until the economy can fully reopen again.

"I appreciate this so much, I feel so blessed and I am so thankful for everyone that's donated to your fund," said Riley.

Portnoy documents all of the surprise FaceTime calls to his millions of followers on his social media pages.