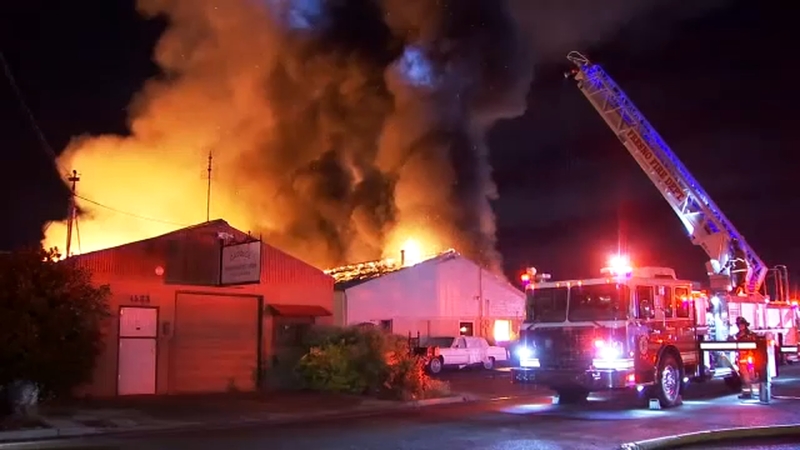 FRESNO, Calif. (KFSN) -- Cleanup is underway after flames reduced what was once Jerry's Refinishing and a neighboring auto repair shop to rubble.

The family-run furniture restoration shop had been in business more than 20 years.

"When you see someone work 10-12 hours a day, put their life into something they love doing and you see that going up in smoke in a matter of minutes, it's a reality check," says Jim Richardson.

Richardson's Surveillance Integration business is just across the street.

His cameras have kept a watchful eye on the Maple and Pine location for more than three decades.

Though he arrived after fire crews, he says his cameras captured what could have been the start of the fire.

"Around 12 Friday morning, you see a little bit of smoke coming off the gable of the back building," he said. "You get a bit of a glow around 1:30 am then it literally explodes through the roof at about 2:30 am."

Video timestamped after 3:30 am shows several flashes before the fire grows.

Fresno Fire crews were called to the blaze just before 4:30.

"The fire had already advanced so far by the time they were alerted to it, they immediately took on a defensive posture basically to protect the surrounding structures," says Fresno Fire PIO Jonathan Lopez.

The intensity of the fire prompted crews to call for additional resources with a second alarm.

Dousing the flames within an hour, firefighters were able to stop the blaze from destroying neighboring businesses.

While there was damage to at least two others, no injuries were reported and crews were able to pull a dog that watched the property to safety.