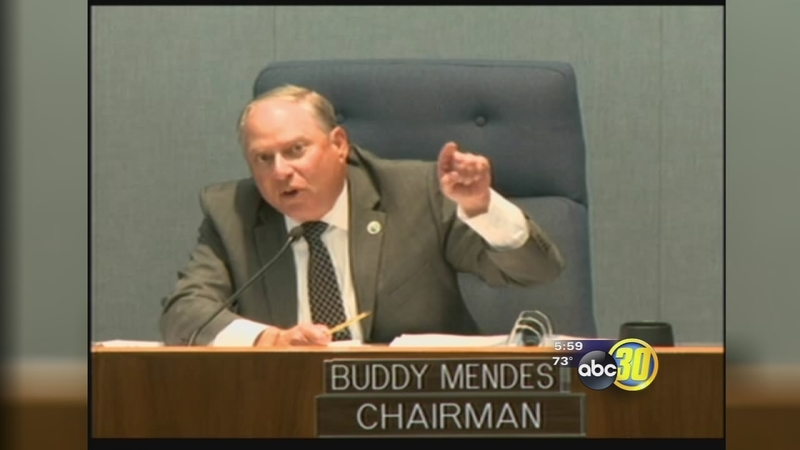 El Porvenir, Calif. (KFSN) -- A Fresno County supervisor overflowing with passion in a battle over expensive water in a poor, rural community. The county is considering whether to increase water rates to people in the far west who already pay a steep cost for water they can't even drink.

Like their neighbors in Cantua Creek, the small Fresno County farm community of El Porvenir is stuck with an expensive water system they can barely use.

"Currently, the water rate we pay each month is $110 for water we can't drink or use to cook with," said Alma Navarro, El Porvenir.

Navarro came to a county supervisors meeting Tuesday to protest a $5 increase to the rate she pays for water contaminated by chemicals. The water comes from Fresno County through a contract with the Westlands Water District, which deals mostly with Ag interests. And when Janaki Jagannath followed Navarro with complaints about Westlands, supervisor Buddy Mendes cut her off.

"Why is that water so high? Do you know the answer to that question," asked Mendes.

"The answer to that question has actually been investigated," responded Jagannath.

"No, the answer to the question is your leftist buddies up there in Northern California won't let them run the pumps! That's why that water is so expensive! So don't come here in front of me and lie like you're doing right now," said Mendes.

Supervisor Mendes didn't want to relive his outburst when we offered to show it to him. He knows he came on strong-- but he says he gets passionate about the water issue and he goes into a defensive mode when people blame the Westlands Water District for the problems in El Porvenir and Cantua Creek.

"They're victims of the federal government and the pumping restrictions. They're the biggest victim, but they're being victimized by the so-called people helping them, because they're pointing them in the wrong direction," said Mendes.

Jagannath said she gets where Mendes' passion comes from, but said his comments are rooted in opinion, not fact. She said water is a right in California, and there should be a discussion of how to get safe drinking water to poor communities instead of continuing to squeeze them for more money.

"It is appalling, if not shameful, that we have a board of supervisors that can consider the idea of shutting off water to an entire community," said Jagannath.