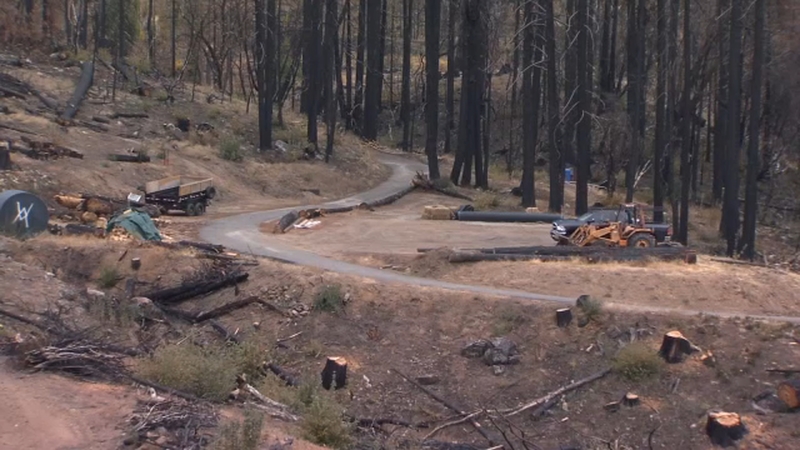 FRESNO, Calif. (KFSN) -- From a drizzle to a downpour, rain is expected to hit Central California this weekend.

A flash flood watch has been issued for areas near burn scars from last year's massive Creek Fire.

Now, the Fresno County Sheriff's Office has released a mapping system to show the areas at highest risk for mudslides.

"They've slid before so they could slide again," said Kelly Matheson.

Matheson and her family used to live just below Cressman's General Store. That's until the Creek Fire burned the home down last year.

They're slowly working to build it back, but have bought a place in Shaver Springs in the meantime.

She said last year, they were concerned about mudslides at the end of last year, but they didn't happen.

This year, she knows it's a possibility, but is less concerned.

"If it washes stuff away, let it wash it away, we'll have to fix it when it does," Matheson said.

Johnanna Haas said her husband's family had a cabin as well, but it also burned down in the Creek Fire.

They visited the property Friday to cut trees into fire wood to take back down to their Clovis home.

Even though the family doesn't have plans to rebuild right now, they're keeping the property and are concerned about possible damage from rain.

"Definitely worried about possible things sliding down and roads and things that have been corroded by the fire," said Johnanna Haas.

Haas and Matheson both have properties in a high risk area for mudslides, according to the Fresno County Sheriff's Office Winter Storm Risk Map.

Over the last year, experts have traveled through the burn scar area, determining areas most at risk.

"What this does, it's going to take a lot of the guessing work out of it for people to know, 'Hey, where I'm at, am I in danger of a mudslide? Of flooding?' said Fresno County Sheriff's Office Spokesperson Tony Botti.

The map allows people to navigate around or put in a specific address.

If evacuations are ordered the colors on the map will change to show which areas are under evacuation warnings or evacuation orders.

"Right now, start familiarizing yourself with the different zones and then just bookmark that, that way you can know exactly where you live, see if the colors change, know if there's going to be any expectation of you due to the storm," Botti said.

The sheriff's office will have extra deputies patrolling the area near the Creek Fire burn scar this weekend to keep an eye for any issues.