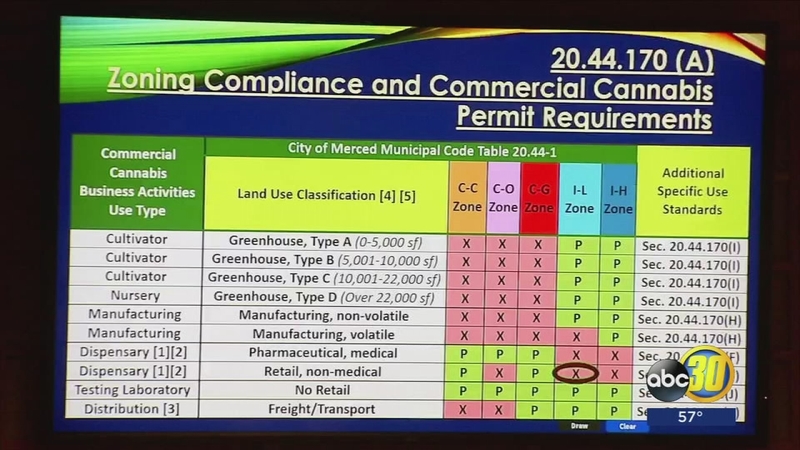 MERCED, Calif. (KFSN) -- Merced City Council voted tonight to approve the first draft for an ordinance that would allow cannabis business to operate in the city.

In the Merced Council Chamber, zoning for cannabis businesses in the city was a hot topic.

So much so that dozens of community members showed up for a meeting that lasted nearly four hours.

The city's planning department presented its draft of how cannabis businesses could operate if the ordinance is passed.

It focused on specific zoning areas and whether there could be recreation use of cannabis in office space but the question on if a business could be 600 feet from a school as opposed to the proposed 1,000 feet raised a lot of concern.

Councilmember Michael Belluomini said, "Why would we push these businesses that have some elements... that could bring about criminal activity."

After spending close to a half hour on this regulation the city decided to keep it at the suggested 1,000 feet from schools.

Then the next debate was about whether or not it should be added to next years ballot so voters can make the decision.

However, one city councilmember made it clear that should not happen.

Anthony Martinez said, "I really don't mean to be openly critical but the point you make about giving it to the people you're suggesting putting it on a ballot in a year where there is traditionally is a lower voter turn out than Presidential elections."

In the end, the council in a five to two vote agreed to pass the first reading of the draft.

And while some supported it, others feared what it will do to the youth in Merced.