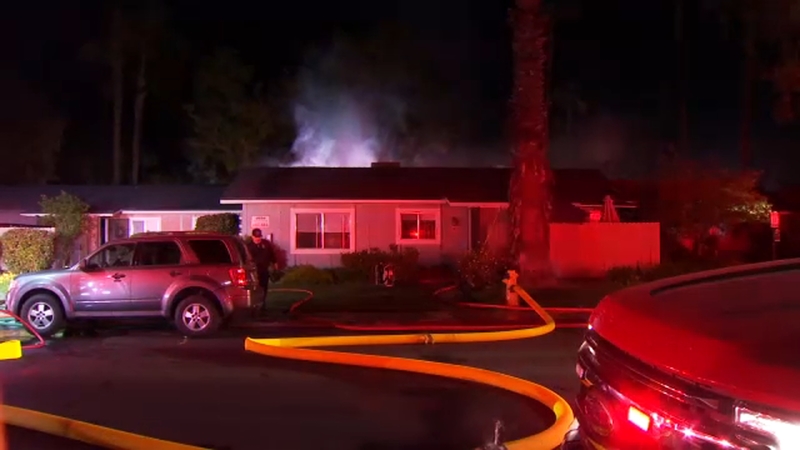 CLOVIS, Calif. (KFSN) -- An early morning attic fire sent smoke and flames through the roof of a Clovis apartment complex and left more than a dozen people displaced.

The fire broke out around 1:30 a.m. Monday at the Woodside Village Apartments near Minnewawa and Barstow Avenues.

Frances Crouch was having trouble sleeping, so she decided to read a book in bed.

She said around 1:30 a.m. pieces of her popcorn ceiling started falling.

Crouch said she got up and brushed it off the bed.

"And suddenly, it smelled a little odd," Crouch said.

An attic fire at an apartment complex is Clovis left more than a dozen people and pets displaced early this morning. Today there were large piles of debris on the sidewalks and people clearing out belongings that weren’t damaged. @ABC30 pic.twitter.com/FYUid5KELr

She went outside and that's when she figured out there was a fire in the attic.

"I looked up and there's just smoke pouring out of there," Crouch said while gesturing at the roof.

She called 911 and went back in to try to find her cat Pookie, but couldn't find her.

So she started alerting neighbors and the manager.

The Clovis Fire Department showed up and was able to get the fire out in about 30 minutes, but because the units had a shared attic space, crews had to open up the ceilings in four apartments to find the source of the fire.

Power has been shut off to 10 units, leaving more than a dozen people and pets displaced.

But Clovis Fire Chief John Binaski says this could've been much worse.

"Normally what we see are these calls in the middle of the night, people are asleep, not a lot of people driving through the neighborhood, so these fires get bigger before someone recognizes them, calls us." Chief Binaski said. "We were fortunate someone was up reading a book."

Crouch was uninjured and eventually found her cat hiding under the bed.

Monday, among the debris, were Crouch's belongings including slippers and jewelry.

Books, slippers and litter boxes were among the debris removed from the apartments. @ABC30 pic.twitter.com/KUL10Ym35W

"Mostly it was my bedroom. They went in there and brought down the ceiling and everything," Crouch said.

Crouch says she'll be staying with her daughter until she hears from the apartment complex.

Officials say the cause of the fire appears to be electrical.

"No one was hurt, all animals were good. At the end of the day, if there is a good outcome from fire, that would be one of them," Chief Binaski said.

Fire officials say no one was home in one of the units where the fire was burning, but they did rescue a dog.

It was taken to Clovis Animal Services until they could track down the owner.