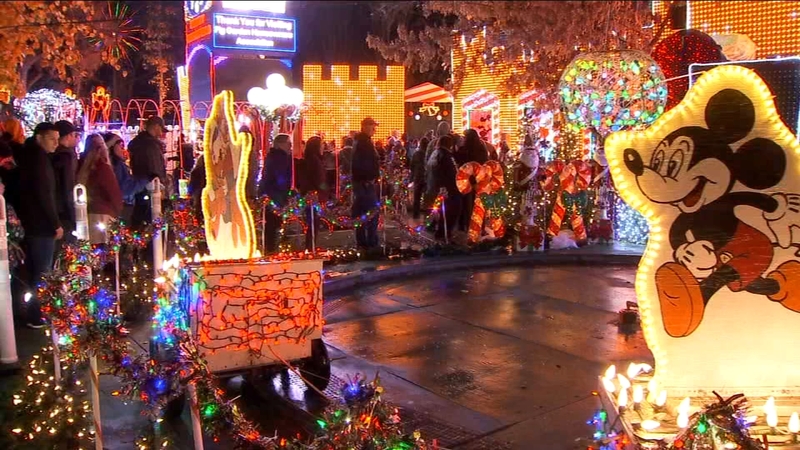 FRESNO, Calif. (KFSN) -- For a 96th year a 2-mile stretch of northwest Fresno is glowing.

Van Ness Avenue in the Old Fig neighborhood has been transformed into Christmas Tree Lane where thousands of lights and decorations are on display.

"We bought hot cocoa and everything were excited to see the lights," said Maria Malta.

Opening night doubled as the first walk night of the 25 day display.

"It's a nice tradition to pass on to all the kids i just see everybody comes out and has a great time," said Karen Peck of Fresno.

Peck has been coming since she was a child so sharing the lane with her children and now grand children has been a special part of the holidays.

"I like all the lights on top and walking around both sides," said Daeya Peck.

"It has a bunch of lights it has a giant clock and firework lights," Jaoquin Villareal said.

Alexander starts decorating mid-October. He calls it his labor of love.

"Just the smiles on people's faces its family it gives back to the Fresno community," he said.

Though weather was a concern for opening night, which is also the first walk night of the celebration, the crowds didn't thin.

Having just moved from Los Angeles, Corina Sanchez is walking the lane for the first time.
"We heard a lot about it and excited to see what all the hype is all about," said Sanchez.

Close to 70 deputies with the Fresno County Sheriff's office will patrol the area by car, motorcycle, bike and horseback.

Other than the potential for smash and grabs with unattended cars, their biggest concern is making sure families stick together so each intersection has at least one deputy on hand.