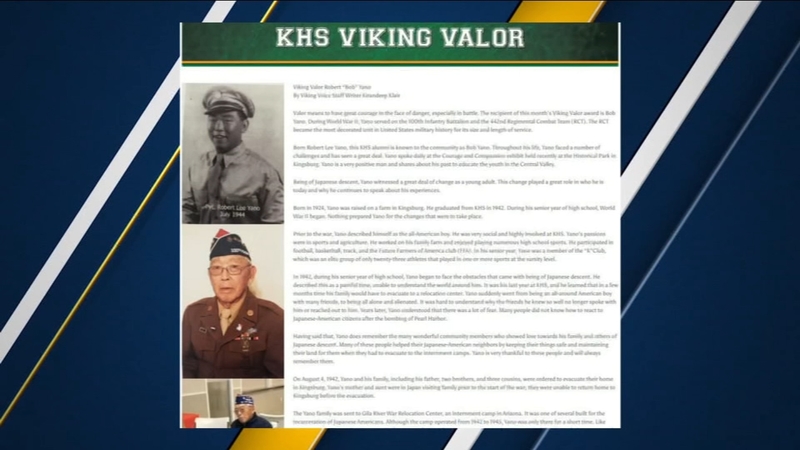 But before kickoff, some of the school's oldest graduates will take the field, including 94-year-old Robert Yano.

Yano was born and raised in Kingsburg, but shortly after graduating in 1942, he and his family were sent to an internment camp in Arizona.

"He grew up here, he played sports here at this campus, and then his world along with other Japanese Americans-it was all turned around," Kingsburg High junior Kiran Klair said. "And what he did with that is he took that energy and he made it something positive."

Last school year, junior Kiran Klair listened to Yano tell his story at Kingsburg Historical Park, where she learned he was willing to die for the United States, despite the discrimination he faced.

After his internment, Yano joined the 442nd Regimental Combat Team, an elite Army unit made up of Japanese Americans.

He served bravely alongside his brothers in France, Germany, and Italy.
"I don't care where you come from, what religion. It's you and me," Yano said. "If I gotta save you, I'll save you, if I have to die, I die. That's it."

Klair wrote a tribute to Yano, but she felt her school needed to honor all of their Nisei-American born, of Japanese descent who were unjustly uprooted from their homes and detained during World War II.

So she organized Friday night's ceremony, which will recognize their experiences.

Eventually, a plaque honoring them will hang on the south side of the football stadium.

"There will be some that (say) 'Eh, it doesn't matter,'" Yano said. "But there will be a lot of them that will say, 'Hey did this really happen?'" "That's perfect what she's doing, I love it."
"There is a lot that they can be upset about," Klair said. "There are things that they might have hatred for, but they don't. They're very positive and they used what they experienced to educate the young like me so we know. And we should always remember what happened so it doesn't happen again.

Football may be the main event inside the stadium, but every high school in the Valley has some space for a history lesson, however ugly.