Victims identified in crash near Hanford leaving 3 dead, including 13-year-old 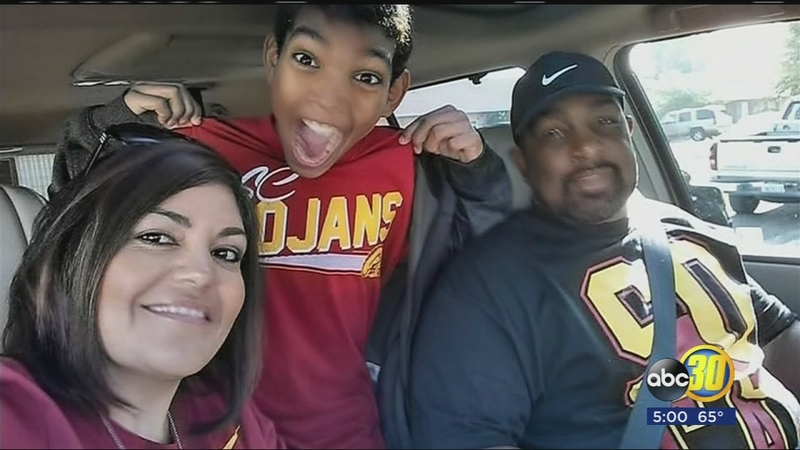 Victims identified in crash near Hanford that left 3 dead, including 13-year-old

HANFORD, Calif. (KFSN) -- Marvin and Marina LeFridge lost their baby brother Monday night in a DUI crash that also took the lives of their mother and step-father.

"We were a family of six people and with a snap of a finger, we're three-- something so, so avoidable," said Marina.

Kyan Wimbley, 13, and his father, 55-year-old Alphonso Wimbley, died at the scene while 44-year-old Krsiten Wimbley died later at the hospital. They were on their way back from Kyan's basketball practice in Fresno. At around 8:30 p.m. they were hit by a truck at Highway 43 and Idaho Avenue.

The California Highway Patrol said the driver of the pickup, 42-year-old Adalberto Carrillo, was arrested for driving under the influence of alcohol, and is being treated for his injuries in Visalia.

"My mom was an epitome of love, she's like the glue that keeps everything together,' said Marina.

"He made my mom feel like she was the most special woman in the world," said Marvin.

While Kyan, like his siblings, excelled at sports and had a smile that would light up the room-- his mother always using the hashtag 'shines like a star' for her youngest child.

"I feel like he literally took the best quality from each of us and they're all put together in that one precious little boy," said Marina.

For Marvin and Marina, it's incomprehensible how the three people they loved most-are now gone. Three people who had so much love to give, but love they say won't be lost just because they are gone.

The principal of Corcoran High School, Antonia Stone, said, "Last night, the community of Corcoran and Corcoran High School lost several members of a beloved and supportive family. This family was very visible and supportive of our community and high school events. As a school, we are deeply stricken by this loss. And our hearts go out to our student and the other surviving family members: one who is a current CHS student, another who is a coach and former CHS graduate, and the third who is also a former graduate of CHS. It was a very sad day on campus for students and staff."