KFSN
By Vanessa Vasconcelos
FRESNO, Calif. (KFSN) -- Smoke could be seen for miles as a raging inferno burned for nearly two hours.

Fire crews battled the elements as the wind pushed the fire, they say started along Highway 99, across a commercial lot.

"There's no roads in the middle of it so we had to get additional resources on scene that have the ability to drive off of the roadway in order to make access," said Division Chief Cameron Long.

“We’re Firefighters. It’s what we do. We look out for one another.” This King’s County Firefighter was driving by the 99 & Cartmill Fire, with his son, so he sprung into action and aided fire crews diverting traffic. @ABC30 pic.twitter.com/JktfVOFhEk

Tulare City crews had to call for backup. Already working another incident, Cal Fire crews were able to assist.

"They had to go until their tanks ran out and then drive back out to get more water and then come continue to fight," Long said.

The fire, just feet away from shoppers, caused a Tulare Outlets building to evacuate. Employees watched as crews kept the flames from jumping the roadway.

"It's amazing they stopped it fast on this side,' said Tulare Western High School student Jade Covarreuis.

#BREAKING UPDATE: fire crews have knocked out the #grassfire before flames could spread to nearby #Tulare Outlets. @ABC30 pic.twitter.com/f77jERoUBx

Within minutes of knocking the flames out, crews were called to a house fire.

"We had one engine from Visalia covering the city for us, so they responded initially," Long said. "They knocked the fire out before our resources got on scene."

Despite windy conditions, no nearby houses were impacted.

Four people and three dogs survived this house fire on N. E st. Visalia and Tulare Fire crews not only knocked out the flames before spreading to nearby homes, they spent about 15 minutes doing CPR on “Foxy,” a 6 yo puppy! He’s going to make it!! Details live at 11! @ABC30 pic.twitter.com/PTFa2d5xlQ

The four people living in the home were able to make it out safely with their pets, including 6-year-old Foxy, who fire crews spent 15 minutes giving CPR and oxygen.

"He was barely alive when they carried him out, and they put oxygen to him, and he's doing just fine now," said resident Dennis Lamb.
Report a correction or typo
Related topics:
tularetulare countyfire
Copyright © 2020 KFSN-TV. All Rights Reserved.
FIRE 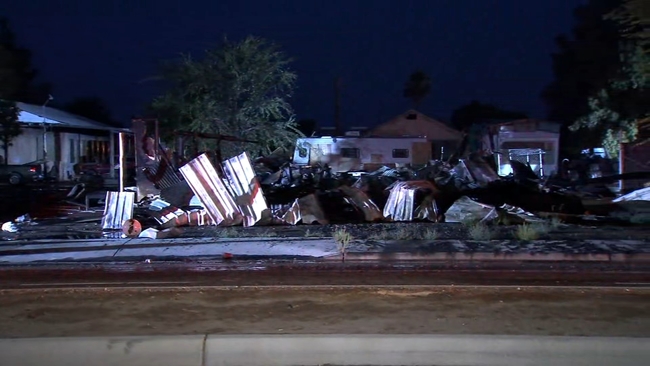