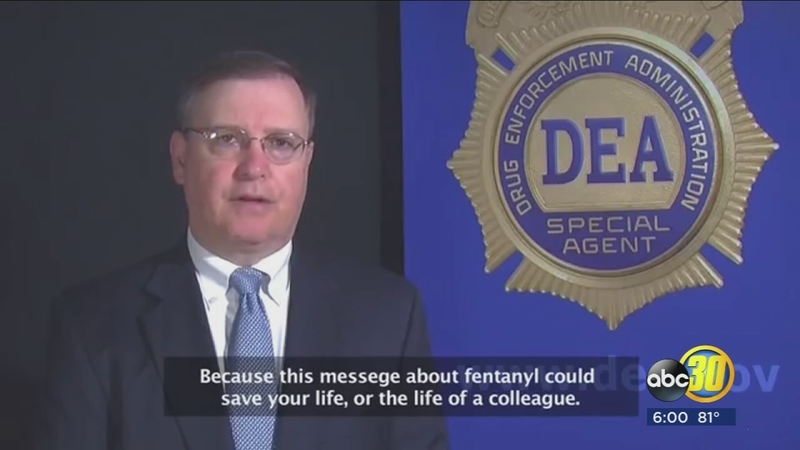 And the Drug Enforcement Administration has a new warning for first responders. Federal officials are warning officers and firefighters Tuesday about the deadly threat being caused by powerful opioids that are a major problem nationwide.

The threat is primarily when first responders come in contact with drug users and dealers. The DEA wants law enforcement officers across the country to stop field testing drugs. Two New Jersey officers almost didn't live to tell their story of the routine call that left them breathless.

Investigators didn't know at the time what substance they were dealing with when a search of the suspect's car uncovered two packages of opioids laced with fentanyl and ketamine.

"In case the package was open and or when we pull it out of the door and it ripped and gets airborne, at least it's not going to permeate through the suit and get into our skin," an undercover agent in Fresno said.

A new nationwide warning for law enforcement officers and their canines reminds first responders about unintended contact with potent opioids and the dangers of testing and collecting drugs in the field.

The video features two New Jersey cops, who accidentally inhaled the drug while sealing evidence into a bag. Fentanyl effects are reversible through a nasal spray called Narcan.

Some officers now carry it with them. American Ambulance always has it on board, although mostly for overdose patients. The nationwide epidemic has local paramedics using the reversal drug more than ever before.

"Since January of this year, we've given Narcan 171 times," Mike Estrada with American Ambulance said.

"Basically this is about 45 minutes of air," an officer said.

The dangers of unknown drug exposures have even some first responders are being forced to wait when it comes to concerning drug calls.

"Anytime we do actually make entry to a scene, if we feel like it's unsafe, we will actually back out," the officer explained.