WABC
UPPER WEST SIDE, Manhattan -- The NYPD says a man who attempted to escape police custody is now under arrest for a shooting on the Upper West Side of Manhattan.

The incident happened on Monday outside the Amsterdam Houses on West 63rd Street just after 4 p.m.

Officials say 27-year-old Joshua Wiley was shot at the location, but he was taken to the hospital and is expected to survive.

During the course of the investigation, a number of people were arrested.

That included 28-year-old Raymond Johnson, and Eyewitness News was there when he somehow escaped from the back of a police car while in handcuffs and tried to run from the scene.

He was quickly tackled and restrained by multiple officers in the middle of the intersection and taken back into custody.

Exclusive video from the scene shows how it unfolded:

Johnson struggled with the officers before being being literally carried away.

The officer caught on camera taking down the suspect was treated for a leg injury.

Johnson is charged with attempted murder, assault, criminal possession of a weapon, resisting arrest and escape.

The person who was shot, Wiley, allegedly picked up the gun and fired a shot as well. He's facing two counts of criminal possession of a weapon and reckless endangerment.

Two other men were also taken into custody for fighting at the scene of the shooting.

The weapon has not been recovered.

The NYPD says it is policy to rear cuff any person of interest or suspect who is being taken into custody.

An investigation is being conducted as to whether or not Johnson was rear cuffed before his attempted escape, but it is believed he managed to move the cuffs to the front before fleeing the police car. 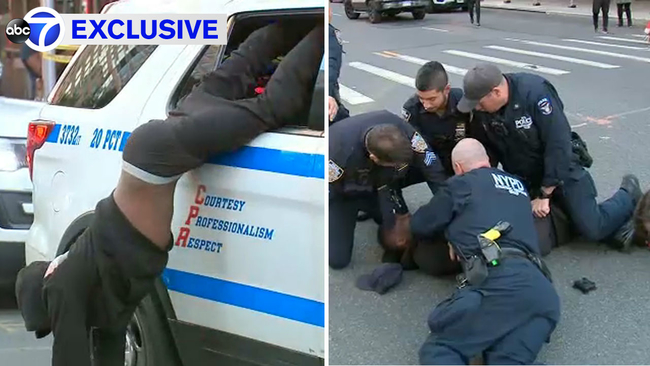