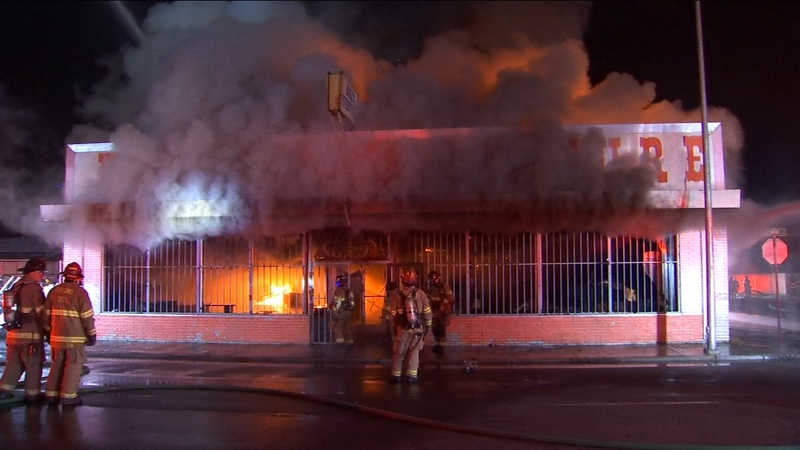 FRESNO, Calif. (KFSN) -- Smoke and embers were sent several feet into the air Friday morning, as flames ripped through what used to be Hall's Furniture in Central Fresno.

Crews arrived a little after five and found flames shooting out of the back of the building. The fire quickly spread to the entire store and the roof started to collapse.

Fire officials say they got a call just after 5 a.m. Friday of reports of smoke and flames coming from Hall's Furniture store near Belmont and 5th.

"The rear portion had so much fire that, that building lost its structural integrity," said Randy Reitz Fresno Fire Battalion Chief.

It was too dangerous for Firefighters to go inside, so they had to battle the blaze from the outside. No one was in the building at the time.

"We were going to take an offensive mode meaning that we would attack from the interior, but we revised that and actually went to a defensive mode due to tot he amount of fire that was involved," said Reitz.

They had no choice, but to let it burn. This isn't the first fire at the location. Firefighters said, Back in June they were called to the same address for a small exterior fire. According to the Fresno Police Department, from April to August they received multiple calls for suspicious activity. Five calls were for possible burglaries.

"It looks like it was not in active business, I didn' t look like there was a lot of retail stock in the building," said Reitz.