Arrests made during protest outside Livingston Foster Farms facility 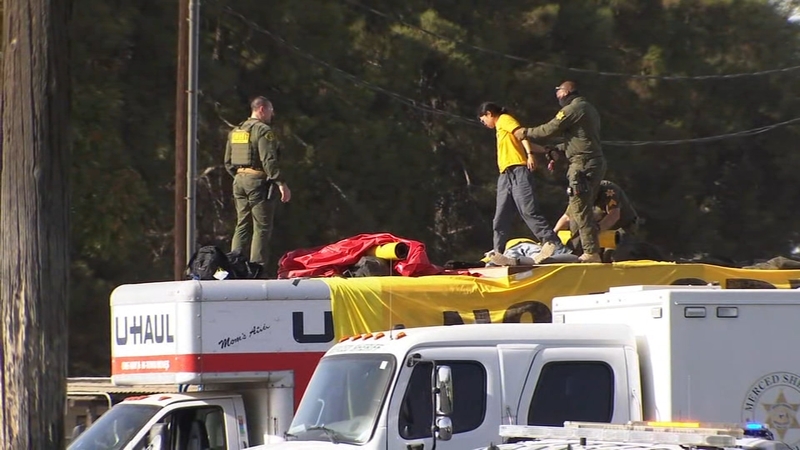 Arrests made during protest outside Livingston Foster Farms facility

LIVINGSTON, Calif. (KFSN) -- They came to make their mark and be heard but several left in handcuffs.

Over 100 protestors from the animal activism group Direct Action Everywhere gathered outside the Foster Farms headquarters in Livingston.

"They got on top of the U-Haul, they chained themselves up there somehow and then we also had a large group of them thaT had concrete barrels that they had put their arms through and chained themselves together," says Daryl Allen with the Merced County Sheriff's Office.

RELATED: 'They don't care about the workers': Foster Farms employee at Livingston plant says he's scared to go back

The demonstration that began around 10 am went on well into the late afternoon Tuesday. The Merced County Sheriff's Office says most of the protest was peaceful but after attempts to negotiate with animal activists in chains, officials say 11 were arrested for trespassing onto private property and resisting arrest. A risk the group felt was necessary.

Organizers say the demonstration drew activists from as far as South Korea and Mexico City.

"We are here today to call on Gov. Newsom and other California leaders to pass a moratorium on the expansion of factory farms and slaughterhouses," says Samanta Eachus.

Direct Action Everywhere posted a video to Facebook showing two activists taking two chickens from a truck headed into the Livingston facility Tuesday. One of those activists, actress Alexandra Paul of Baywatch.

The group alleges inhumane slaughter practices are happening inside the Livingston plant.

RELATED: 'They don't care about the workers': Foster Farms employee at Livingston plant says he's scared to go back

We reached out to Foster Farms regarding the protest, and they responded, saying: "The Direct Action Everywhere activists are blocking private property and represent a safety hazard to vehicular traffic and our employees. We are working with law enforcement to safely resolve the situation."

Authorities say the production was slowed but not stopped inside the plant as trucks were able to use an alternate entrance.