The Fresno County Coroner's Office has identified the three men who were killed after their car crashed into a big rig carrying animal carcasses.
KFSN 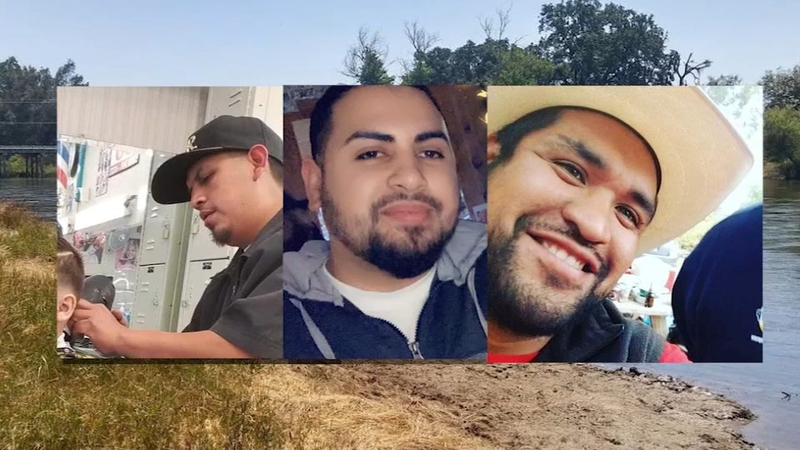 FRESNO COUNTY, Calif. (KFSN) -- The King's Hair Barber Shop on Kings Canyon and Chestnut was shut down again due to the pandemic.

So on Tuesday, barbers Pedro Gonzalez and his friend Frank Sifuentes decided to head to Laton-Kingston Park. Pedro's nephew Carlos Gonzalez joined them.

California Highway Patrol officers say for some reason, the red PT Cruiser Frank was driving never stopped as it was headed northbound on Cornelia, approaching Manning. The intersection is a two-way stop.

They crashed into a big rig carrying animal carcasses.

"The PT Cruiser basically drove right into the side of it. Causing the PT Cruiser to get caught up between the duels and the axles of the tractor and the trailer," says CHP Sgt. Matt Radke.

"There was long extended damage due to the fact there was a power pole, with electrical wires down and diesel fuel leaking so it slowed down the process of trying to extricate the injured," he added.

Only a female passenger in the back seat survived.

The driver of the big rig, a middle-aged man, is at the Community Regional Medical Center in downtown Fresno with minor to moderate injuries.

Family members say Carlos was the adventurous one of the family - a mechanic at an ag company who entertained his family with his terrible, yet funny dance moves.

Pedro was the more artistic one who loved to draw. He was friendly with a big heart. And Frank liked to barbecue and loved exploring the outdoors.