There were 12 women living there, recovering from drug and alcohol abuse.
KFSN
By Nic Garcia 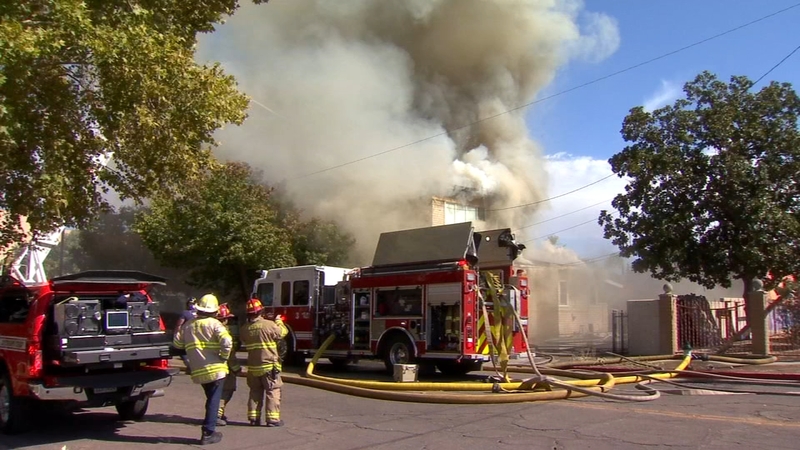 Crews were first called to Van Ness and San Joaquin Street in downtown Fresno at around 1:15 pm.

That first fire tore through a historic house that's been the home of Light-House Recovery Program since 2014.

The intense flames spread to every floor and the attic, destroying the house.

When firefighters arrived, it was already too late to save the home.

They had to focus on protecting surrounding structures from catching fire.

Vikki Luna is the director of Light-House Recovery Program, which has operated in the historic house for seven years.

Luna said there were 12 women living there, recovering from drug and alcohol abuse.

Although the fire tore through the building, forcing them to begin the search for a new location, Luna is thankful everyone got out safely.

"Some of the girls who graduated our program happened to be in the area and saw the smoke and so they came over and were just in tears because this is the place where their life was changed," Luna said.

Repairs were being made to the roof Sunday - a mishap with the equipment sparked the fire.

"We're still under investigation. We know there was roofing repairs. Our investigators will investigate that and come up with a conclusion," said Fresno Fire Battalion Chief Tim Fulmer.

The women who were staying here are now in temporary housing while the program looks for a new location.

Luna is confident their work will continue, despite this devastating loss.

The historic house was built in 1901 in the Dutch Colonial style and stood out among its neighbors for its unique architecture.

Just about an hour after the fire that destroyed it, crews received reports of another structure fire near Cedar and Central Avenues.

Fire crews putting out a fire on Cedar and Central. Appears to be a small warehouse fire. Working on gathering more info from the fire dept. stay with @ABC30 for updates. pic.twitter.com/vve35kVLAm

When they arrived on scene firefighters were met with a fully involved fire coming out of a metal building.

They were able to work fast enough to stop the flames from spreading to other nearby buildings but at least one semi-truck did get damaged.

Fire officials say there was a delayed response to this fire fight as a result of the blaze in downtown.

"When that happens, the resources that would normally get here first are committed somewhere else, so the apparatus that are coming to this incident are actually driving across multiple districts to arrive which causes a delay in response," said Fresno Fire Battalion Chief Bob Camp.

Authorities say it's not often where they find themselves in these sort of circumstances but always look at logistics to be ready in they're spread thin.

No injuries have been reported as a result of this fire.