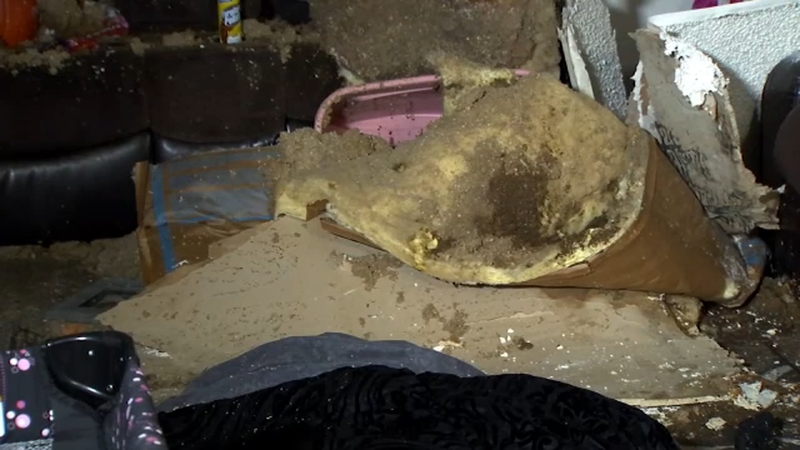 FRESNO, Calif. (KFSN) -- Rain on the roof broke through a family's apartment, exposing a troubling tenant issue in Fresno.

We've now learned that a total of 18 units were impacted by the storm at the La Casa Lisa Apartments and 16 families have now been moved to hotels while repairs are made.

"This is honestly the size of my room, maybe a little smaller," said Chasity Barajas Lopez.

She, her husband and their three-month-old daughter have been placed at a Motel 6 while they wait for repairs to be made to their home at La Casa Lisa Apartments.

Monday, their roof collapsed as the storm rolled through the Central Valley.

The landlord of the apartment complex, JD Home Rentals, is paying for the stay, but Barajas Lopez says they're crowded in a small room without a kitchen.

"Not even a microwave, how are we supposed to you know, anything -- even if we get frozen foods, you know?" Barajas Lopez said.

The family has now created a GoFundMe account to help with food and expenses to find a new place to live.

New details about what led up to the roof collapse are now coming to light.

Crews had been working to repair the leaking roof, but on September 22, Councilmember Tyler Maxwell said a "Stop Work" notice was issued by the city of Fresno because they did not have the proper permit.

Maxwell said JD Home Rentals did eventually apply for a permit, but it can take weeks to get approval.

"In the meanwhile, they thought it would be sufficient to cover some of those roofings with tarp," said Maxwell.

JD Home Rentals responded to Action News via email and said the city has refused to issue them a permit for the property.

They said the roofers did work that is typically done prior to the first inspection, but the city would not inspect the work because it didn't have a permit, so they covered it with a "waterproof underlayment membrane."

"This waterproof underlayment would have provided enough coverage to get us through the storm had it not been for the strong winds which ripped the underlayment off." The company said it will continue to pay for the hotel stay until the families are back in their unit or the tenancy is ended. "We have offered to all of our tenants the return their security deposit and any remaining rent unconditionally. So far none have requested it. They are also able to move to another available apartment and transfer their deposit and rent, or stay with family and be credited for the days they are not in the unit."

Councilmember Maxwell said he is working with the city attorney's office and code enforcement to see if the landlord should face fines.

"This type of negligence by developers, property managers and property owners in our city is not going to be tolerated. I'm not the kind of councilmember that's going to sit around and let this kind of thing happen again." Maxwell said.

Maxwell said the city didn't have any complaints at the La Casa Lisa Apartments prior to this incident, but he will now be recommending it to the Anti-Slum Enforcement Team (ASET).

ASET was created as a proactive tool to check on rental properties to ensure there weren't excessive code violations or wide-scale habitability issues.

According to the most recent ASET report released October 1, JD Home Rentals properties have been the focus of the team on multiple occasions.

It includes a property on Echo that had 56 violations and another on Olive that had 141 violations.

In an email response, JD Home Rentals told Action news many of the reasons a property is listed is because the landlord is not aware of calls for fire and police.

"We are usually unaware of a problem tenant and when we are, we are engaged in the long process of evicting the tenant when we are placed on the list. Any repairs that are outlined in the few ASET inspections we have had so far have been minor repairs that have been completed without displacing tenants that are not contributing to the strain on the Fire and Police Departments. If we are made aware of these bad actors, we work diligently within the parameters of the law to resolve the problem."

Councilmember Maxwell says he'll be making a push for more code enforcement officers to help prevent this sort of thing from happening in the future.

As for the tenants, anything that was damaged in the collapse may not be covered unless they have renters insurance.

JD Home Rentals said it does not require tenants to purchase insurance, but it's strongly encouraged.