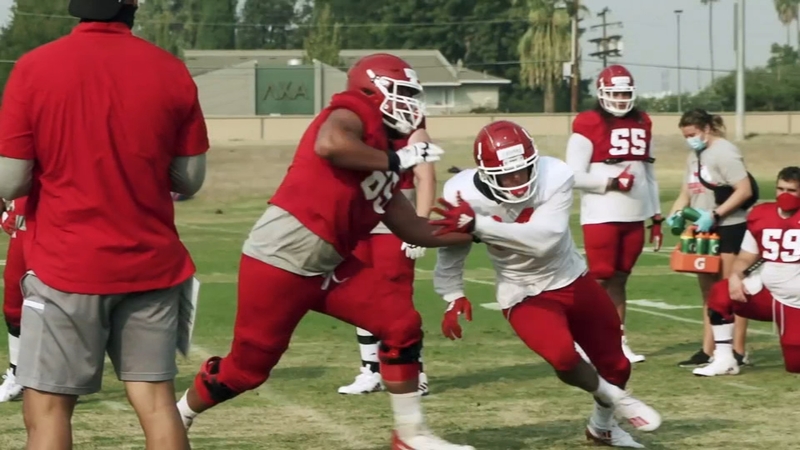 "There's such a business-like approach to how they approach every practice right now," Kalen DeBoer.

"Guys are buying in and really giving everything they've got," Evan Williams. "It's been fun to watch."

But before they could start prep - first they had to come together.

"As soon as they told us 'Kevin we have a season,' I got off zoom and I drove to Fresno," says Kevin Atkins.

"It was kind of a snap of the fingers where we had to cut off the home life again with our parents and start back on the college life, and the coaches made sure 'Did you give your mom a call today? Did you give your dad a call today?' and things like that and that stuck to me the most because family is everything to me," says Chris Coleman.

The team is back to organized workouts - albeit on the concourse and field of Bob Bennett Stadium. Prior to that, the team had to figure out a way to get it done, often at local parks.

"We found little places to go that you couldn't close and so we went over there to run for strength training," Atkins said. "We would wrestle and do things like that. Anything we could find."

And while that position battle is ongoing - those meetings are also helping out every position group prep for the season.

"As far as an offensive line, we have our Saturday meetings where we used to go in the O-line room and do a player-run meeting and we continued to do that over Zoom," says Matt Smith.

On the other side of the ball, first-year defensive coordinator William Inge is switching to man to man coverage. Something that's highlighted the weapons of the Bulldog offense.

"It's been a challenge and it's definitely made us better as a whole squad to go against this offense every day and to see all these looks that they're giving us," he said.

Now - first-year coach DeBoer is preparing to face Hawaii - a team that prior to the restart, the Dogs weren't set to face until week nine.

"Finding time in the midst of a crazy fall camp to work on some game-planning and figure out what we might be seeing, I know has been fast and furious for them as well," DeBeor said.