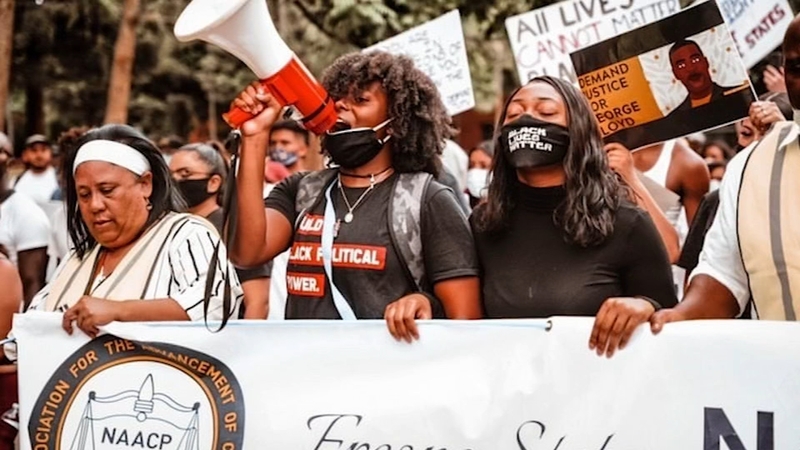 FRESNO, Calif, (KFSN) -- It's probably on your to-do list: give back to your community. But it takes a lot of time, effort, and commitment.

At just 23 years old, D'Aungillique Jackson has been doing it almost her whole life and educating others along the way.

Jackson is the youngest member of Fresno's Commission on Police Reform, President of the Fresno State chapter of the NAACP, and the student body president-elect.

"It means everything. I was honestly afraid that I wasn't going to get it this time around either. So when I found out I cried," said Jackson.

When she announced her second run for the office, Jackson declared she stood for two things.

"Equity and justice...I think that I could really help this place. I think that you know, we need to start shifting our conversations towards inclusion."

It's a conversation she's been having since she was a child.

"I remember being a little girl like four or five, and just crying whenever I saw something bad happened."

Last summer, it led to organizing a large and peaceful demonstration in Fresno after the death of George Floyd.

"That is something that I'll never forget...the community deserved that because there is a lot of hurt in every Black community because of brutality."

Her parents DeGuizz and Gil'Scott Jackson say she's always had the heart and strength to demand change.

"For everyone. Not just Black people or Black women, or Fresno State students. My child is doing this for the world! So, I'm proud that she calls me dad," her father said.

"She never wanted to let anybody down, you know. If you went, 'Oh no, that's not possible' she'd go, 'Yes it is. How about if we try this," said DeGuizz Jackson, D'Aungillque's mother.

Jackson graduates next year with a degree in Social Psychology. After graduation, she plans to stay in Central California to keep moving the fight for racial equality and justice forward.