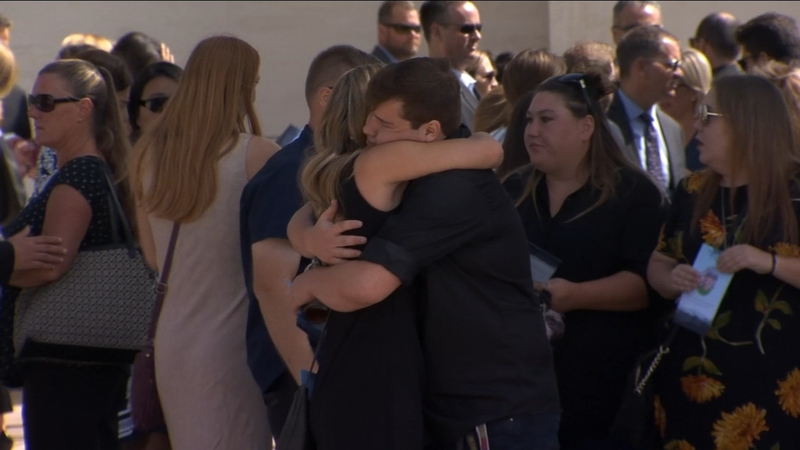 FRESNO, Calif. (KFSN) -- Members of the Clovis Unified community joined family and friends to say goodbye to a man who touched so many lives.

Gavin Gladding was laid to rest at Peoples Church in Fresno Monday.

The Fort Washington vice principal was killed in a hit and run while jogging on September 16th.

A Funeral service was held at Fort Washington Elementary on Monday. It took place at People's Church near Herndon and Cedar in Northeast Fresno.

Friends and family said their final good-byes to Gavin Gladding, a Clovis Unified educator who was killed in a hit-and-run crash.

Hundreds of people waited outside until the doors opened right before the service began at 10 a.m.

"It's amazing how much impact members of the school community have on kids on families on each other so when this type of thing happens everyone is negatively impacted," said Larry Powell Peoples Church Pastor

Nearly 2,000 people attended Monday's funeral service. Colleagues wore special ribbons to honor Gladding. Students past and present say Mr. Gladding was that teacher for them-- a man they say had a knack for connecting with young people.

"Everyone has these great memories so here coming together it was an amazing inspiring thing to see that he affected all these people and impacted them," said former student Sarah O'Farrell.

According to Sarah O'Farrell, Mr. Gladding made a strong impact on her life and inspired her to join the Peace Corps, just as he had done as a young man.

"He was one of the main reason in my life. I always had this passion and drive but didn't really know where to direct but he was one of the first people who showed me something that was bigger than myself and I wanted to be a part of that," said O'Farrell.

Investigators believe he was the driver of the vehicle that hit Gladding.