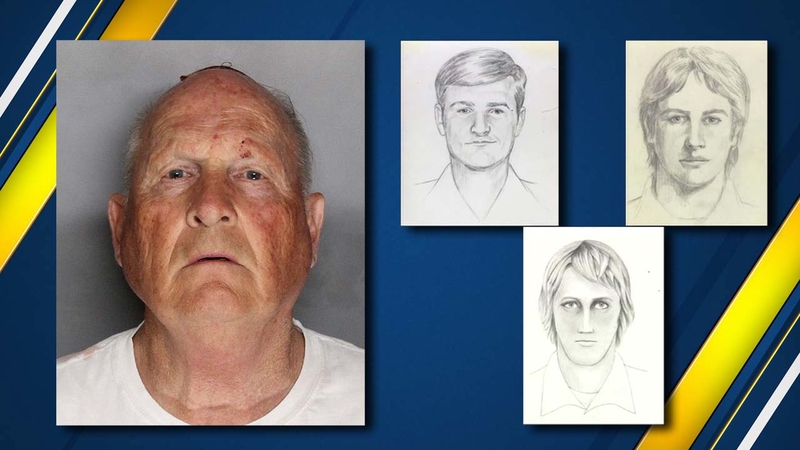 FRESNO, Calif. (KFSN) -- After almost four decades of searching, the manhunt for one of California's most notorious criminals is over.

Authorities say 72-year-old Joseph James DeAngelo, is the elusive criminal who committed at least 12 homicides, 50 rapes, and dozens of burglaries across 10 counties across California between 1974 and 1986.

Officials ended decades of terror with the announcement of the arrest of the man known as the "Golden State Killer." Police believe Joseph James DeAngelo of Citrus Heights is responsible for dozens of rapes and murders that occurred in the mid-70s to mid-80s.

During his alleged crime spree, which makes him one of the worst serial killers and rapists in U.S. history, DeAngelo was called the "Golden State Killer," the "East Area Rapist," the "Original Night Stalker," and the "Visalia Ransacker."

Despite thousands of tips pouring in over the years, DeAngelo's name had not been on the radar of law enforcement before last week, Sacramento County District Attorney Anne Marie Schubert said.

A break in the case and the arrest came together in "light speed" during the past six days.

Prosecutors say they made a partial DNA match by using genealogical websites that contained genetic information from a relative of DeAngelo.

It was enough to get a warrant to obtain a DNA sample, that investigators collected from items discarded by DeAngelo.

"It looked as though he might have been searching his mind to execute a particular plan he may have had," but never had time to act, Sacramento Sheriff Scott Jones said.

He was arrested on suspicion of committing double-killings in Sacramento and Ventura counties and later charged with four counts of murder in Orange County, officials said. Ventura County District Attorney Gregory Totten said prosecutors would seek the death penalty.

DeAngelo's crimes are believed to have started in Visalia with a series of burglaries, where he was dubbed the "Visalia Ransacker." At the time, DeAngelo was a police officer in the nearby town of Exeter.

In December 1975, Action News interviewed Visalia Police Detective William McGowan who pursued a suspect in one of those burglaries and was shot at.

"I fell down the impact knocked me back and he continued to run throwing some items apparently taken in the area."

McGowan suffered a minor injury, the bullet hit his flashlight.

One of the detectives originally assigned to the 'Visalia Ransacker' case was detective Bill McGowen, who dedicated his life to breaking the case.

The same suspect has long been thought to be responsible for the 1975 murder of College of the Sequoias instructor Claude Snelling, who was shot when he saved his teenaged daughter from being kidnapped from their Visalia home.

ONLY ON ACTION NEWS: Visalia Ransacker's victim speaks about the night she was nearly abducted and her father was murdered

Visalia Police Chief Jason Salazar said there is no DNA evidence connecting DeAngelo to the death of Snelling, but they are working to tie him to the crime.

If the link is confirmed, it would boost the number of DeAngelo's victims to 13.

Terri Kotchevar was one of Snellings students who never forgot the crime.

"When I heard about it, it was just, it sounded like something he would do, any father would do especially him, I was just so shocked and devastated."

After leaving Exeter in 1976, DeAngelo went to work for the Auburn Police Department, east of Sacramento, where 50 crimes, including two killings and a series of rapes occurred. The perpetrator was named the "East Area Rapist," who would sneak in through windows at night and surprised sleeping victims who ranged in age from 13 to 41.

When encountering a couple, he was known to tie up the man and pile dishes on his back. He threatened to kill both victims if he heard plates crash to the floor while he raped the woman. He then ransacked the house, taking souvenirs, notably coins and jewelry before fleeing on foot or bicycle.
DeAngelo was fired from the Auburn department in 1979 after being arrested for stealing a can of dog repellant and a hammer from a drug store, according to Auburn Journal articles from the time. He was convicted of the theft and fined $100.

Ten slayings occurred after he was fired and all took place in Southern California.

The cases were all connected starting in 1999 when Orange County sheriff's homicide detectives used DNA to link a murder in Irvine to nine other slayings in in Orange, Ventura and Santa Barbara counties.The genetic evidence was later used to connect the same suspect to dozens of rapes in Northern California.

Although it's unusual for serial killers to stop, Jones said they have no reason to think DeAngelo continued to commit crimes after 1986, when the last rape and killing occurred in Orange County.

Scientists developed a way to identify rapists and others through DNA fingerprinting in 1986, the same year as DeAngelo's last alleged murder.

Experts noted that DeAngelo, who graduated from Sacramento State with a criminal justice degree, most likely knew about the highly publicized DNA breakthrough.

The graduate of nearby Folsom High School and U.S. Navy veteran who served during the Vietnam War seemed to settle into his own suburban existence in the modest three-bedroom home on Canyon Oak Drive.

For 27 years, he worked in a cavernous Save Mart Supermarkets distribution warehouse in Roseville, a Sacramento suburb, before retiring last year, company spokeswoman Victoria Castro said.

"None of his actions in the workplace would have led us to suspect any connection to crimes being attributed to him," she said in a statement.

Neighbors said DeAngelo took meticulous care of his house, which was always perfectly painted and his lawn manicured. But he was known for an explosive temper and loud cursing.