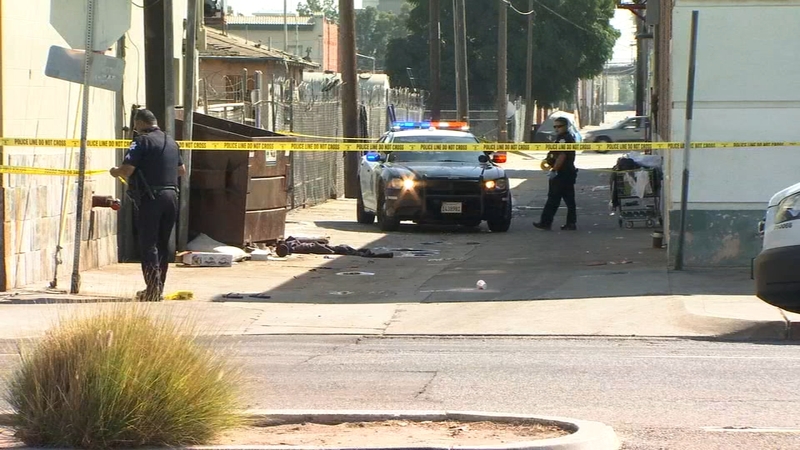 FRESNO, Calif. (KFSN) -- An afternoon drive home for Edward Marcoz took a dramatic turn when he saw a woman being attacked near Fresno and E Street in downtown Fresno.

"He was going down at this lady so I tripped out couldn't believe what I saw," he said.

Marcoz immediately went towards the action to do what he could to help.

"I bumped him with my car," Marcoz said. "He came in and started swinging a knife in my car."

To protect himself, he backed up. Seconds later, the suspect took off and attacked another man. Marcoz says the suspect had the victim on the ground and was pointing a knife at his neck.

"He had a couple of scratches on his neck like pushing his hands like if he let go he was dead," he said.

That's when Marcoz says another good Samaritan stepped in, which allowed him to use his car to help as well.

"Hit him with a bed frame kinda thing and smacked him, he rolled down so at that moment I used my car to pin him down," Marcoz said. "I felt my car rise when I was on top of him so I didn't want to get in trouble so I was like ah man let me hop off I reversed this dude got up and proceeded to swing his knife."

By that time, police arrived and were forced to use less lethal options to control him.

"Less lethal bean bag did cause the suspect who was in the middle of the street to drop the knife," said Fresno Police Lt. Mark Hudson.

The woman he stabbed was taken to the hospital with injuries to her arm. The man who was also a good Samaritan was stabbed in the chest. Both are expected to be OK.

Meantime Marcoz is left with some damage to his car while the suspect's handprint sits on his hood.

Evidence that he says does not make him a hero.

"This is what anybody should do instead of taking out phone and recording actually do something," he said.