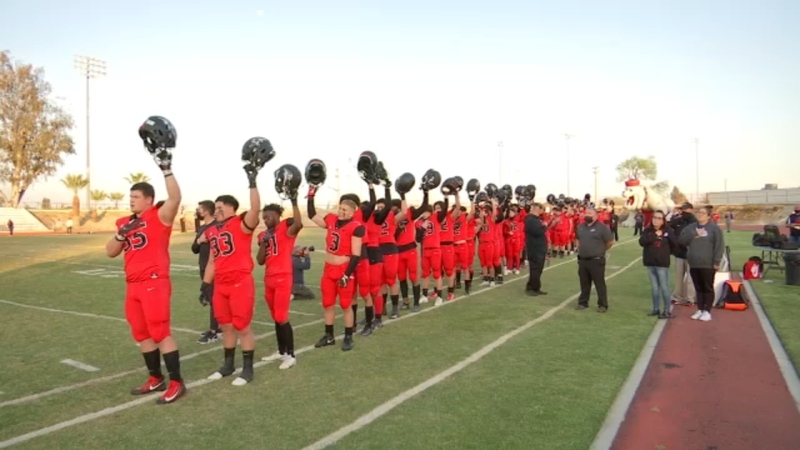 HANFORD, Calif. (KFSN) -- Minutes to kick off, the stadium at Hanford High School went silent as a grieving family stepped onto the field Friday night.

Zachery Hullbert's parents were approached by football players carrying a precious memory of their son.

Red and white jerseys with the number 52 were presented to them.

They were worn by 18-year-old Zachery and now they'll find a permanent home with his family.

The opposing team also presented them with a gift - a metal cutout of the number 52.

"It is an overwhelming feeling, but it is a good feeling," said Marilyn Galindo, Zachery and Ryan's aunt.

Zachery and his 20-year-old sister Ryan were murdered in their Hanford home on Monday.

RELATED: 'They had each other's backs': Hanford family grieves after man stabs ex-girlfriend, her brother to death

Their family is now left with many unanswered questions.

"There is the question of why and how could we have prevented this," said Galindo.

Ryan, who used to play for the high school's softball team, was also honored.

Galindo said her niece and nephew had so much left to offer the world.

"They were just full of life, joking around, having a good time, and very respectful," she said.

He was supposed to be the starting kicker at Friday's game.

Before the team took the field they vowed to play even harder in the memory of Ryan and their teammate Zachery.

"Knowing that he is unable to play he can play through us," said Zachery's friend Jeremiah Vega.