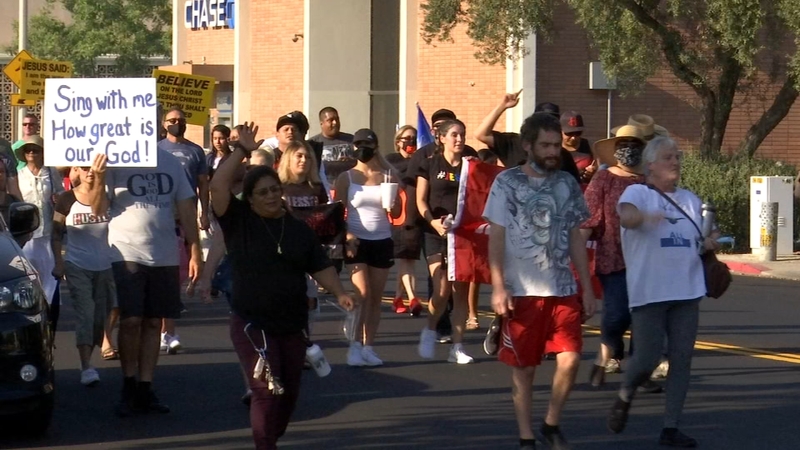 FRESNO, Calif. (KFSN) -- United under one cause, a large group of people marched through the streets of Hanford to protest the state's regulations on churches.

As it stands, places of worship are not allowed to hold indoor services.


"We hope to encourage others to stand up for what is right," said Francisco Rincon of Hanford.

"It is about representing Jesus Christ, but at the same time we are out here representing the community and just letting them know that churches are essential," said Ralph Hurtado of Hanford.

The rally started at Lacy Park. There, people from across the valley came together.

Pastor Robert Styre with Unshackled Church traveled from Oakhurst to be part of the demonstration.

"It's not that we are trying to be rebellious against our government, but we don't want the government to come against our first amendment right," he said.

No new guidance was issued for churches. In recent weeks, multiple court rulings have sided with health order restrictions.


So at this point, it's still unclear when they can return to indoor worship.

"You can go get toilet paper in aisle five, but you can't get your healing in one of the aisles of church," said Pastor Bobby Guerra with the Hanford Pentecostal church of God.

The march came to an end at Civic Center Park, but the rally continued. Close to 200 people participated in song and prayer.

"If it wasn't for Jesus, I don't know where I would be, amen," said Guerra.