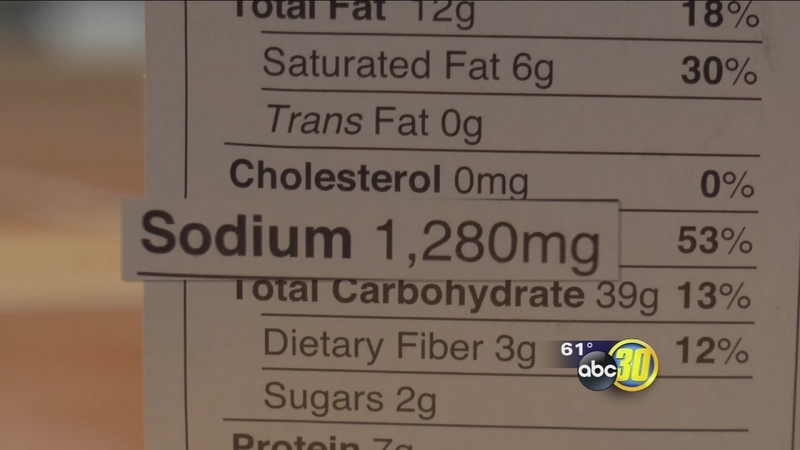 ORLANDO, Fla. (KFSN) -- If you are like most people, then you probably have too much salt in your diet. The recommended daily amount is 2,300 milligrams, but most Americans consume an average of 3,400 milligrams per day. That is almost 50 percent more than the recommended amount and that is endangering your health. Too much sodium can lead to high blood pressure, which can cause heart disease and stroke. It isn't enough just to throw away your salt shaker because sodium lurks in pretty much everything you eat. But there are some ways you can cut down on the sodium.

First, cooking meals from scratch is the best way to know how much sodium is in your meals. On average a frozen meal will have over 1,000 milligrams of salt, but you can cut that amount in half when cooking with fresh ingredients right at home.

Rohit Bhateja, MD, cardiologist from the Florida Hospital, said, "Avoiding putting in more than a teaspoon of salt in your daily food is the best way to prevent a problem."

If you are using canned vegetables, you can remove some of the sodium by rinsing them before use.

If you don't have enough time to cook a meal, you still can go with packaged foods. Just make sure to check the label. You want to go for the pre-made meals that are sodium-free or low in sodium. For example, a cup of ramen noodles contains nearly 1,300 milligrams of sodium, while something that is low in sodium may have fewer than 600 milligrams.

And when eating out, check out the menu before choosing the restaurant. Also ask the server for the meal to be made with no salt added.