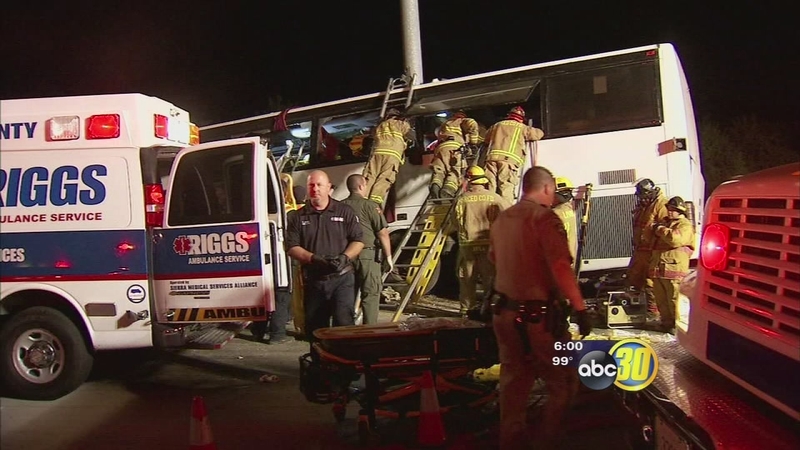 At least 30 people were on board-- six of whom were mediflighted to undisclosed hospitals. Sixteen others were transported to doctors at Emmanuel and Mercy Medical Center.

Only a handful of the bus passengers escaped injury.

The charter bus was heading from Mexico to Pasco, Washington when it collided with a freeway road sign on northbound Highway 99 just before 3:30 Tuesday morning.

"They were stopped in Los Angeles last night. And again, the next stop was going to be here in Livingston on their way to Sacremento and then all the way up to Washington," said Onsurez.

The driver of the bus was 57-year-old Mario David Vasquez from LA-- he is still alive but sustained major injuries. Officials won't comment any further on his condition.

Vasquez's family members call him a responsible father and grandfather.

Vasquez's family members call him a responsible father and grandfather. His family was clearly shaken to learn the bus he was driving was involved in a deadly accident in Merced County.

Family members described Vasquez as a hard-working man who loved driving for Autobuses Coordinados USA. They said sometimes he worked seven days a week, but add Vasquez always traveled with a second driver.

Denise Menjivar, Vasquez's granddaughter, said, "Yes he was very responsible. When he got tired he told the other driver, 'you could take over from here,' because he knew it was important to come home."

Menjivar said Vasquez was more like a father to her. She added she knew something was wrong when he wasn't there to wake her up this morning.

Overall, the charter bus company has a satisfactory rating according to the Safety Measurement System.

Action News took a look at a report about the charter bus company and it doesn't list any crashes within the last two years.

It does, however, show a list of violations, mostly maintenance violations that were issued during inspections. And the most significant violation was issued to a driver for driving with a suspended license.

The bus that crashed is registered to Autobuses Coordinados USA in Fresno. Although, it isn't clear whether the company was operating it at the time or if it had been leased out. Either way, the company wasn't interested in talking with us, but CHP officers were there inside the building when we stopped by.

From here, we did some more digging and found more info about the inspections. According to the Federal Motor Carrier Safety Administration, the company has a high rate of vehicles going out of service and drivers being pulled from the job.

There have been issues with brakes, tires, and steering systems.

The driver who was behind the wheel in this crash also may have had the most severe violation. Our affiliate at ABC7 did a criminal background check and found that he was cited for operating a vehicle with a suspended license last year. He was charged in February and convicted the next month.